On Saturday night the 14,000-seater Baoshan Arena played host to ONE: ‘Legendary Quest’. Yoshihiro Akiyama received a rude welcoming to the promotion as he bowed to former welterweight title challenger Agilan Thani after a three round fight.

Wearing four-ounce gloves for the first time since November 2015, Akiyama struggled to mount offense in the first half of the taxing encounter as he became a recipient of Thani’s thudding punches and high-impact takedowns.

To compound the misery, Akiyama was in pain and was seen hobbling for the majority of the first round after taking an accidental knee shot to the groin from Thani. The Malaysian carried over his striking rhythm to the second frame, where he caught the UFC veteran with a jumping knee-left hook combination. Although he seemed to be in cruise control, overwhelming his opponent in the exchanges, Thani started to gasp for air which gave Akiyama an opening to pounce. With his opponent exhausted the 43 year old unleashed a series of right hands towards the end of the second stanza.

Bathed in his own blood, an exhausted Thani had to dig deep in the third and final frame, throwing everything he has in his arsenal to nullify the advances of Akiyama. Neither of the two warriors would give each other any quarter as they swapped blows until the very end.

After going back-and-forth in the last period, Thani was the one who earned the undivided nod of the three judges at ringside. He breaks his two-bout losing slide and improves to 10-3 while Akiyama drops to 14-7. 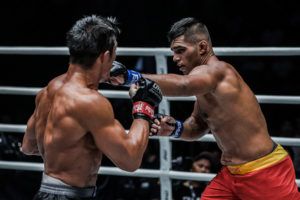 In one of the most anticipated matchups of the evening, Koyomi Matsushima faced Kwon Won Il. Although he is known for his dangerous striking game, the Japanese fighter’s ability to score takedowns from start to finish secured him the decision win.

Matsushima’s constant pressure with his takedowns eventually drained the Korean and earned the Pancrase veteran a decision win.  He improves to 11-3 and is a contender for a featherweight title shot while Kwon drops to 7-2 after suffering just his second ONE Championship loss. Reinier De Ridder of the Netherlands could be the future of the organization’s middleweight division. The Dutchman increased his winning streak to 11 with an impressive stoppage win over Brazilian veteran Gilberto Galvao.

Knowing that a second successive ONE Championship win might be enough to secure a middleweight title shot De Ridder started aggressively. He stalked for a takedown in the opening salvo and bombarded Galvao with a torrent of punches as the round came to a conclusion.

De Ridder picked up where he left off in the second, clobbering hard knees to the head of a grounded Galvao elected to tap at the 0:57 mark rather than sustain any further punishment. The Dutchman improved to 11-0 while the Brazilian drops to 30-7-1. In front of an energetic hometown crowd Chen Lei (6-1) of China scored a workmanlike decision win over Anthony Engelen (8-7). He kept the Dutch-Indonesian combatant guessing and ultimately wore him out with an incessant stream of ground and pound over the course of the three rounds.

The bout would end with all three judges scoring it in favor of Chen. This was his seventh professional MMA fight and the first time he has been the distance.