Anatoly Malykhin has some harsh words for Arjan Bhullar. The reigning ONE Championship heavyweight king turned down multiple offers to defend his title against the Russian.

Instead Malykhin finds himself facing Kirill Grishenko for the interim belt at ONE: ‘Bad Blood’ next Friday. But the Russian still sounds extremely upset that Bhullar refused to fight him,

“I was already at my peak. I was ready to destroy him for the ONE Championship belt. I think that somewhere, mentally, this fear of being destroyed was passed to him. And at some point, he just broke. He doesn’t want to fight.” 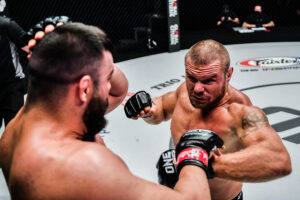 Bhullar is holding out for more money and appears to be willing to sit on the fence indefinitely. It is a stance that definitely does not impress Malykhin,

While the Russian wanted to challenge for the regular title he will have to settle for a scrap that has the interim belt on the line. But Malykhin is adamant this is the only belt that matters,

“I don’t consider this belt interim. I will be the real champion. If the champion refuses to fight, then he is no longer the champion.”