India is on ONE Championship’s agenda in 2020. The promotion looks set to put on its first card in the country in the second half of the year and one heavyweight would definitely like to be involved.

Arjan Bhullar was born in Canada but both his parents are Indian. He is hoping the opportunity will arise to compete in Delhi or Mumbai and would love do so as the reigning ONE Championship heavyweight king,

“By the end of next year I want to have that title around my waist and I want to take it to India. That is the goal for 2020. That is what’s going to blow up the sport in India and it will help me accomplish so many things that I’ve wanted to do as an athlete and outside of the sport.”

Bhullar went 3-1 during a two year UFC stint. He decided to sign for ONE Championship after his contract expired and says he has no regrets,

“ONE treats everybody better from top to bottom. I’ve seen it. I’ve talked to folks, from champions all the way down to fighters making their debuts and they’re all saying the same thing, they love it here.” 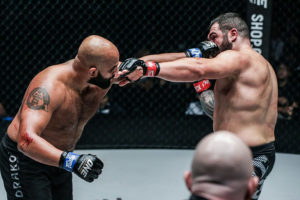 Bhullar comes from a wrestling background. He won a gold medal at the 2010 Commonwealth Games in Delhi, representing Canada in the country of his parent’s birth.

But at ONE: ‘Century’ part II he utilized his striking to score a decision win over Mauro Cerilli. He saw it as a valuable opportunity to utilize an underrated aspect of his game,

“I don’t want to be a one-dimensional athlete just relying on one skill. I want to be a complete mixed martial artist. It was about getting an opportunity to apply all my new skills,” he said.

With the Italian expecting to be busy defending takedowns Bhullar decided to let his hands do the talking,

“This was the perfect opponent. He took the path of least resistance. He was expecting the wrestling and I went with the striking, so you take that and you win.” 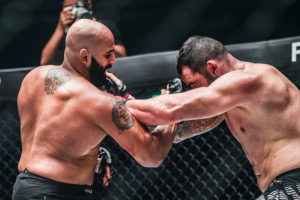 There are only a handful of heavyweights on the ONE Championship roster. So Bhullar is entitled to feel that successful debut has put him in immediate contention for a title shot.

The belt is currently the property of Brandon Vera, another UFC veteran. That is the matchup the Canadian wants,

“I have a lot of respect for Brandon Vera as a fighter and as the champion. He’s done a great job for himself, for his family, for the fans, for the Philippines and for the Filipino people. That’s everything I want to do in my career (for India).”

Vera was stopped by Aung La Nsang at ONE: ‘Century’ part II in a light heavyweight title bout. However he remains the heavyweight champion and Bhullar has huge respect for the Fil-Am fighter,

“Brandon is tough and it’s not going to be an easy fight. I’m going to have to walk through fire but I feel like I have what it takes to beat him and become the champion.”

Bhullar’s fellow Canadian Gary Mangat suffered a submission loss at ONE: ‘Mark of Greatness’ last weekend. It means the heavyweight could be set to become the face of the promotion’s Indian expansion, a role he clearly relishes. 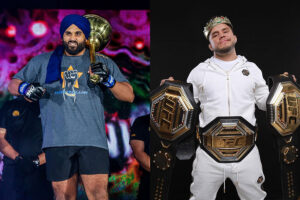