The two go back a long way but they don’t appear to be on particularly good terms. At least according to Hamasaki who said,

“I’m glad we get to meet again after nine years. I have no plans of being friendly and I will finish the fight this time.” 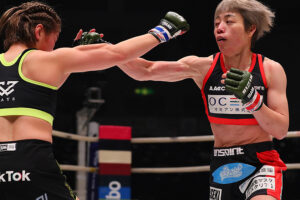 So it won’t be a particularly nostalgic reunion for the Rizin super atomweight champion whose title won’t be on the line.

“I’m very excited to be fighting again, and especially against a tough, challenging opponent. I think we both went through a lot and experienced a lot since our first fight, and I think we’re both different fighters. She has proven to be a great fighter who she is and I’m excited to face such a tough opponent,” she added.

Fujino was recently crowned as the strawweight Queen of Pancrase, albeit only the interim version of the belt. Hamasaki’s title won’t be on the line at Rizin 30 this weekend but the champion says she just wants to face good opponents and this matchup meets that criteria,

“It really doesn’t matter. When I fight, it’s a fight and I don’t think about the belt or my title,” Hamasaki told AsianMMA.com. 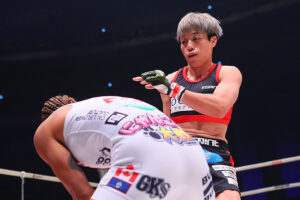 Hamasaki won their first meeting via unanimous decision as she defended her Jewels lightweight queen title back in 2012. Having won eight of her last nine fights, Hamasaki is still one of the best in the world in her weight class and she’s currently enjoying her second reign as the Rizin champion.

Although Hamasaki’s belt won’t be on the line in Saitama this weekend, the 39-year-old is clearly relishing another crack at a formidable adversary like Fujino.

Having gone the distance in the first fight she is determined to finish Fujino at the Saitama Super Arena on Sunday,

“I am determined to finish the fight and be the clear winner for this rematch,” she added.

Hamasaki turns 40 next year but says she is still motivated to train and compete,

“I love everything about it. The lifestyle, the training, but the feeling after a win is unbeatable and it’s highly addictive.”