Arjan Bhullar became only the second fighter to hold the ONE Championship heavyweight title with his win over Brandon Vera in Singapore. That victory made headlines all over the world and earned him a tribute from the Canadian prime minister.

Canadaâ€™s own Arjan Singh Bhullar is the first fighter of South Asian descent to become an MMA world champion – congratulations, @TheOneASB! Whether at the Pan Am Games, the Commonwealth Games, or the Olympics, youâ€™ve always competed with courage and made Canadians proud. Bravo. https://t.co/lNl02z9au4

Bhullar was born in Canada and has lived there his whole life. He represented the country at the 2012 Olympic Games in London before making the transition from wrestling to MMA.

Bhullar fought four times for the UFC, winning three of those bouts before signing with ONE Championship. His parents were immigrants from India and he has been described by Trudeau as being ‘the first fighter of South Asian descent to become an MMA world champion’.

Bhullar improved his record to 11-1 with the stoppage win over Brandon Vera at ONE: ‘Dangal’. His opponent had held the heavyweight title since its inception in 2015.

ONE Championship had planned to hold an event in India in 2021 but those plans have been put on hold by the Covid-19 pandemic. 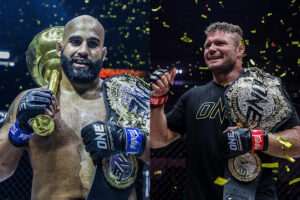