Zeus FC 4 went off without a hitch on Saturday night in Seoul.  The mask ridden crowd at Swiss Grand Hotel turned up despite the ongoing concerns over the coronavirus.

The main event was originally scheduled to have Kerwin Tan face off against Choi Seung Guk but the Filipino was pulled and Lee Seung Chul stepped up on one week’s notice to fill in.

The bout started out in typical flyweight fashion with both men dancing around at high speed. Lee entered with a wild combination and Choi countered with a timely right hand.

This left an opening and Choi dipped under for a takedown which he completed after some initial resistance. From side control to mount the transitions were smooth and he had Lee in danger. 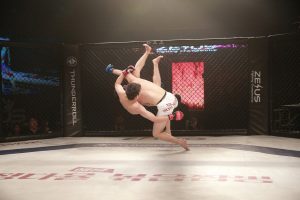 Punches rained down and Lee ended up exposing his back but was able to scramble out and get to his feet. After the referee stood them back up, Choi slammed his opponent back to the mat and worked from side control.

Moments later, Lee found himself stuck in the crucifix with no way out. The Korean Zombie MMA product pounded down punches and it was eventually over.

Choi wins his third in a row and moves to 4-2 overall while Lee loses his second straight fight, leaving him winless as a professional. 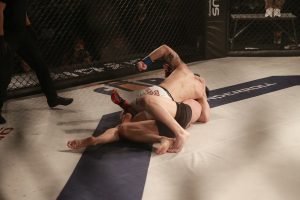 The co-main event pitted Camila Rivarola against Kwon Hye Rin. The latter had a kick caught early in the fight and ended up on her back with her opponent in half guard.

Rivarola worked diligently to pass into full mount but was unsuccessful so the referee stepped in and stood up both fighters.

After a brief collision, Rivarola dragged Kwon to the canvas once again. They scrambled and the Swede took the back and worked to obtain the rear-naked choke.

Even though the Korean defended well and wiggled away, Rivarola transitioned perfectly into the mount and dropped down a myriad of unanswered punches.

Struggling to get out of trouble, Kwon gave up her back and was flattened out. A couple more punches and she exposed her neck so Rivarola squeezed on an arm-triangle choke to finish the fight.

Kwon has been submitted in both of her appearances for the organization and drops her record to 2-4. Meanwhile, Rivarola comes back strong after having a winless 2019 to obtain her first finish and stretch to 3-2-1 overall.