Daichi Abe returns to the winner’s circle at Deep 95

Deep 95 took place at the New Pier Hall this afternoon, one of two back to back cards put on by the promotion. In the main event former welterweight King of Pancrase Daichi Abe returned back to the motherland after a rough stint abroad, earning a much-needed victory against Yoichiro Sato.

Abe was able to set the pace and control the distance from early on. He went back to basics and sat behind a stiff jab. Mixing in the left hook and straight right kept Sato flustered for most of the exchanges. When the distance was just right, Abe threw out an elbow from time to time and connected solid.

As he continued with this aggressive attack, Sato’s face was becoming a bloody mess. Even though Abe was getting the better of the striking exchanges, Sato did some damage in the clinch and ended the second round with a solid takedown. 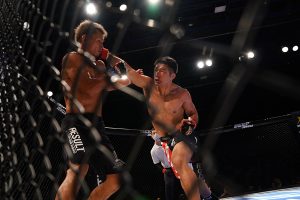 Sato had his best moments in the final round. He was able to rock his opponent and take him down yet nothing materialized on the ground. Abe returned to his feet and returned to where he had the advantage. In the last minute, both fighter cautiously moved around the cage and picked their shots.

It was Abe who would have his hand raised, the UFC and ONE Championship veteran earning a split decision win. It was his first victory since 2017 when he defeated Lim Hyun Gyu at UFC Fight Night 117, his promotional debut.

His record improves to 7-4 and at only 28 years old Abe will look to rebuild his reputation on the regional scene. Meanwhile, Sato drops a decision for the third fight in a row and his record falls to 21-12-2. 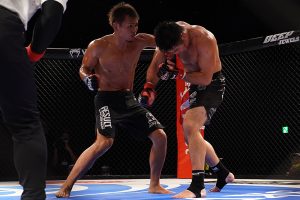 The co-headliner was a battle contested in the megaton division between Hideki Sekine and Ryo Sakai. This clash ended up as a comeback that most people watching could not have expected.

In the first round, Sekine completely bullied Sakai with his wrestling and strength from top position. Sakai survived despite being in some tough spots stuck against the cage and continuously eating punches for his efforts.

The onslaught continued in the next round. Sekine again put his opponent back on the mat and continued to pound down punches. Yet again, Sakai was able to scramble back up to his feet. 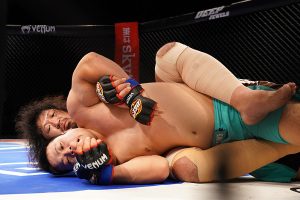 With less than a minute left on the clock, Sakai sprawled perfectly when Sekine initiated another double leg. From that position, Sakai pounded down heavy punches and Sekine was not responsive and looked to be unconscious so the ref jumped in and stopped the contest.

Sakai (9-10) entered the fight on a two-fight skid and completely redeemed himself by coming from behind and getting the knockout victory. Sekine (8-5), on the other hand, loses his second straight and is knocked out for the fifth time in his career. 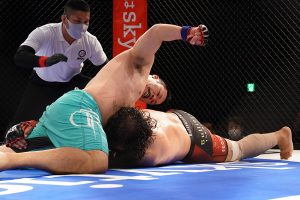 In some other notable performances, lightweight Juri Ohara (26-18-3) returned to the winner’s circle with a first-round upkick finish over Takumi Suzuki (7-5) and Reina Miura scored a narrow split decision win over Marina Kumagai in a special kickboxing affair.