Dana White will not be in attendance at UFC 275. He has decided to give the event in Singapore a miss and plans to spend the weekend gambling with his son instead.

Speaking on the Spinnin’ Backfist MMA Show the UFC president shared his weekend plans and they definitely don’t involve travelling halfway around the world to watch MMA,

“It’s my son’s 21st birthday this weekend. Me and my son are gonna gamble for the first time on his birthday on Thursday then we’re flying down to Miami for the weekend. Caesar’s Palace baby, it’s the best casino in town. Even if they kick me out I’ll still be telling you they’re the best in town.”

Most states in the US do not allow people under the age of 21 to gamble, at least not at casinos. So for White it is the first opportunity for him and his son to indulge in his favourite hobby together.

He is particularly partial to a game blackjack and had been so successful that he was once banned by the Palms Casino in Las Vegas after winning $2 million USD in a single session. It was the second time that this venue had banned the UFC president.

However White hasn’t always been so successful. He admitted to losing $1mn USD betting on a boxing match when  Kelly Pavlik stopped Jermain Taylor in the seventh round in 2007.

With a net worth estimated at around $500mn he can probably afford it. In 2016 the UFC was sold to WWE-IMG for $4bn USD and White pocketed around 10% of that money according to reports.

The first face off of fight week 📸

White won’t be the only notable absentee at UFC 275. Joe Rogan has decided not to make the trip and will be replaced by Michael Bisping on the broadcast team for the pay per view.

With a net worth estimated at $120mn USD he won’t mind missing out on the payday. Rogan seldom travels overseas for UFC events so his absence will not come as a major surprise to fight fans.

UFC 275 is set to get underway at 6am local time on Sunday morning in Singapore. The event is headlined by a light heavyweight title fight between champion Glover Teixeira and challenger Jiri Prochazka.

It will also feature a strawweight rematch between former champions Weili Zhang and Joanna Jedrzejczyk. It is the first time the promotion has ever put on a pay per view in South East Asia and will be broadcast on Saturday night in the US.

Whether or not White will be watching remains to be seen. He might just be too busy at the blackjack tables! 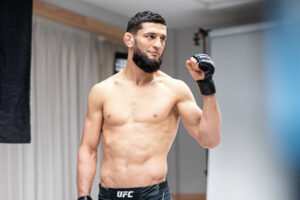