After pulling off a solid promotional debut against Japanese legend Caol Uno this past May, Dutch standout Duane Van Helvoirt authored a perfect follow-up victory in his sophomore appearance by defeating another notable name on the Shooto roster.

Both men provided fans with a tremendous display of offense from start to finish. As soon as the bell rang, the two warriors engaged in a fiery exchange of strikes at the center of the cage. 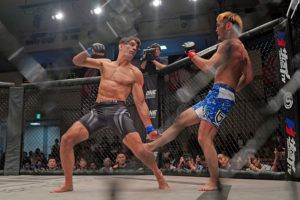 Van Helvoirt unleashed powerful kicks and stinging punches right off the bat, while Inoue countered some of them well with his own strikes. But the Japanese’s attacks were soon nullified when his opponent started to flex his grappling muscles,

In the second round, Van Helvoirt picked up where he left off, drenching Inoue with a volley of lethal shots that opened the floodgates of blood from the latter’s nose.

The final frame saw more of the same kind of action from Van Helvoirt, who scored major points for his cage control and commanding blows to keep Inoue at bay. 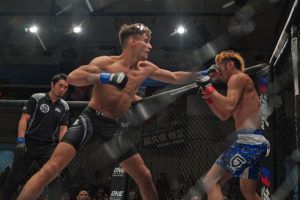 There was no doubt about the verdict that the judges would turn in when the final bell rang as the contest went to the scorecards, awarding the win to Van Helvoirt by way of unanimous decision.

Van Helvoirt built on his dominant triumph over Uno two months ago to earn his second victory under the promotion’s banner and improve his professional record to 19-8 overall.

“It was an awesome fight. He was a tough and game opponent,” he said in his post-fight interview. “I knew he prepared for my grappling skills because of my last fight against Caol Uno. So I mixed it up with my striking. That’s what got us the win tonight.”

On the other hand, Inoue drops to 24-13 after suffering his second consecutive defeat.

In other matches, Shooto bantamweight titlist Shoko Sato (33-16-3) crushed South Korea’s Chang Hwan Hwang (2-3) in the first round of their non-title showdown by technical knockout.

Meanwhile, Ryogo Takahashi (13-3) was nothing short of spectacular in his return to Shooto, disposing of compatriot Takanori Takahashi (9-11-5) in the second round.

Petr Yan says ‘I told you so!’ after Aljamain Sterling pulls out of UFC 267

Christian Lee says: ‘I believe ONE Championship will overturn this decision!’