Kseniya Lachkova has always been at the top of her class. She was a star student and high school and has two university degrees but the biggest test of her life awaits at ONE: ‘A New Era’.

The 23 year old has been matched with Mei Yamaguchi at ONE Championship’s inaugural Tokyo event. It’s a huge opportunity and one Lachkova is very excited about,

“I am thrilled to be on this card. I’ve never fought at a big show like this (and) it’ll be a very special experience for me.”

Lachkova is riding a five fight winning streak and is ranked as the number one pound for pound female fighter competing in both China and Russia. This isn’t her first taste of overseas competition but she has intensified her training regime in preparation for Yamaguchi,

“I’ve recently moved to the Kabardino-Balkaria region in the Caucasus to train in an Olympic reserve school. I don’t go out at night but it suits me because training is my life.” For MMA fans the ONE: ‘A New Era’ card is stacked with familiar faces like Eddie Alvarez, Demetrious Johnson, Shinya Aoki, Aung La Nsang, Yodsaenklai Fairtex and Angela Lee but one name immediately stood out to Lachkova.

Timofey Nastyukhin, who faces Alvarez in a lightweight Grand Prix quarter final, is someone she remembers well from the formative days of her combat sport career,

“I remember him from participating in the same pankration competitions. He won gold when I was starting my career and it’s an honor to fight on the same card with him now. It shows I’ve made good progress.”

Lachkova holds a 10-2 pro record and has never been stopped. Combining academic excellence with success on the martial arts stage required a lot of discipline and she credits her parents with instilling this quality in her,

“I grew up being close to my family and I stayed out of trouble, there was no time for that. My day was split between training, studying and helping around the house.”

Her parents were supportive of her combat sport dreams but there was a caveat,

“I finished high school with a silver medal which is one of the highest forms of distinction in Russia. Then I got two degrees, both with honors. My parents have always supported my passion for martial arts but there was a deal: I had to have good grades at school, too.” 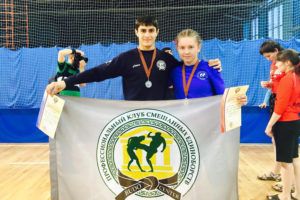 We probably can’t expect too much trash talking from Lachkova. But she is single minded and has her sights firmly set on a successful ONE Championship career,

“I am very calm but I have a very stubborn streak in me. If I want something, I’ll do everything to get it.”

Interestingly Bo Meng, one of only two fighters to ever defeat Lachkova, was scheduled to face Yamaguchi last month but pulled out after injuring her foot during a training session.

It goes to show that the Russian is set for a higher level of competition now that she is on the ONE Championship roster. It’s a challenge, and Lachkova has a tough task ahead of her as she faces a two time atomweight title challenger on her promotional debut.

But it is a challenge Lachkova is determined to meet head on and she plans to make a big impression on the fight fans in Tokyo,

“Being signed to ONE is a big deal for me. I want to show my best on the day (and) I want the audience to remember me.”