Fighters who impress at ONE Warrior Series can earn multi fight contracts with ONE Championship. Kimihiro Eto, Shinechagtga Zoltsetseg and Lito Adiwang can all consider themselves to be in contention after impressive stoppage wins in Singapore.

All three finished their ONE Warrior Series 4 fights inside the distance. Kimihiro Eto needed under a minute to submit Asian MMA veteran Trestle Tan with an arm triangle choke.

The Japanese lightweight improves to 16-4-2 and is riding a four fight winning streak having appeared on every single OWS card. Tan, who has already fought for ONE Championship, drops to 4-8. 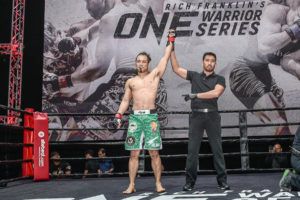 While Eto’s performance was impressive it paled in comparison with the showing of Lito Adiwang. The Team Lakay strawweight stunned Alber Correia with a right hand and then finished him with a barrage of ground and pound.

Adiwang now owns an 8-2 record and looks like he could hold his own against the strawweights on the upper echelons of the ONE Championship roster. Hong Kong based Brazilian Correia drops to 3-2.

Ali Motamed had a very successful amateur career before turning pro and has already shown his quality in two previous OWS fights. He came into the bantamweight bout with Shinechagtga Zoltsetseg as a favourite but the Mongolian turned the tables in spectacular style. Zoltsetseg had Motamed hurt on numerous occasions in the opening round. The Iranian could not cope with his opponent’s wild striking style and unconventional footwork and the finish came early in the second stanza.

Motamed, who drops to 5-3, seemed to injure his shoulder during a sustained onslaught of ground and pound. Zoltsetseg moves up to 3-2 and put in a compelling case for a ONE Championship contract.