The UFC and ONE Championship explored the idea of trading Henry Cejudo for Arjan Bhullar! At least according to the Canadian heavyweight who made the revelation in an appearance on The MMA Hour last night.

Bhullar eventually came to terms on a new contract with ONE Championship that will allow him to pursue his pro wrestling ambitions. But the reigning heavyweight champion says he could have ended up being swapped for Cejudo,

“There was also another opportunity that came towards us through all this and that was Henry Cejudo wanting to come to ONE on a trade. That went high up in the UFC and that was being explored. It was brought to me.”

ONE Championship heavyweight champ @TheOneASB tells @arielehlwani has re-signed with the promotion on a "multi-fight, multi-year deal" that also allows him to do pro wrestling ✍️ #TheMMAHour

Bhullar has already had one stint in the UFC. There is precedent for the two promotions trading fighters with Ben Askren and Demetrious Johnson switching sides a few years ago.

Bhullar does not feel that Askren represented ONE Championship particularly well. The American lost two fights out of three in the octagon and was struggling with injury issues,

“(It) was giving me some good food for thought. Then I got to thinking; this would be a huge thing. Because I know Chatri (Sityodtong) and I know ONE, and I know Dana (White) and the UFC, I feel. Askren wasn’t a good representation of how ONE athletes can compete. He was two years retired, bad hip,” he said.

But after careful consideration Bhullar decided he was better off staying put. ONE Championship just announced a new broadcast deal with Amazon Prime in the US and Canada.

The Canadian is still hoping to fight in the US but wants to do it with ONE Championship,

“We just signed that Amazon deal, we’re in the US, we’re in Canada, big-time deal, groundbreaking breaking news today. We’re gonna have a US event so we’re making moves coming this way and if that ever happens; awesome.”

🚨 BIG NEWS 🚨 ONE Championship is coming BACK to U.S. prime time on Amazon Prime Video 🇺🇸

But while Bhullar is staying put he would love to see Cejudo in ONE Championship. The American was the reigning UFC flyweight and bantamweight champion when he decided to retire from the sport at a very early age.

Cejudo has embarked upon a successful coaching career working with Asian MMA stars like Weili Zhang and The Korean Zombie. It remains to be seem whether he will ever fight again but Bhullar would love to see him in ONE Championship,

“But like I said when this was presented, this was the thought process and the pattern. I thought Henry would be phenomenal for ONE in terms of Mighty Mouse, Adriano Moraes, John Lineker…” 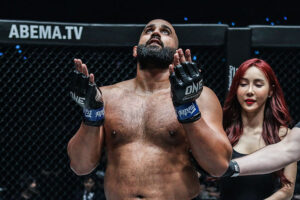