Himanshu Kaushik hoping to claim second Indonesian scalp at ONE: ‘For Honor’

There aren’t many Indian fighters taking out undefeated fighters on the international stage. But that’s exactly what Himanshu Kaushik did earlier this year when he handed Egi Rozten his first career loss.

His reward is a matchup against another Indonesian. Kaushik faces Adrian Mattheis at ONE: ‘For Honor’ this Friday in Jakarta and the 26 year year old feels his career has been revitalized by that stoppage win,

“It was the first knockout win by any Indian on the global stage of ONE Championship, so it was a huge success for me and Indian mixed martial arts as well. That win gives me more confidence than anything.”

After a very poor run of results during ONE Championship’s early days Indian fighters have been holding their own in recent months. Puja Tomar and Rajinder Meena have both scored upset wins and Kaushik is upbeat about his country’s prospects,

“After my first win in ONE, I am very confident and I am very excited to get another victory. I want to prove that India has the best mixed martial artists.” 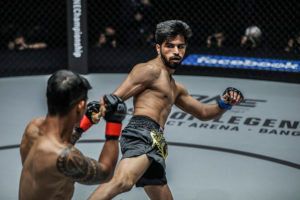 The country discovered MMA relatively recently and is still playing catch up. The sport has been around in Asian countries like Japan, Korea and the Philippines for far longer than India.

But Kaushik sees this changing and has experienced first hand how ONE Championship’s profile has grown in his homeland since Star Sports started broadcasting content,

“I am very happy and thankful to ONE and Star Sports for this deal. Now more people will know about ONE in India (and) I got an invitation to do a TED Talk. People want to take selfies with me, every day I meet new fans of mine and now I have started to live my dream life. Puja (Tomar) is getting the same response after her first win.” he said. 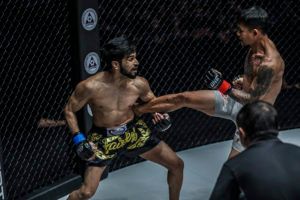 Tomar beat an Indonesian opponent in Jakarta and that’s exactly the task ahead of Kaushik. Mattheis is a veteran of nine ONE Championship bouts and has won five out of his last six fights.

“Adrian Mattheis is a very experienced fighter with wins by striking and grappling,” Kaushik says.

“I watched all of his fights, and I am impressed by his fighting skills. He makes good game plans according to his opponent, but it looks like he is a little weak in stand-up, so I will strike with him.” 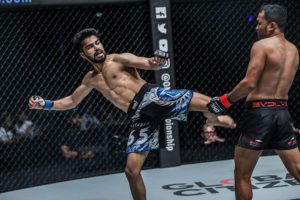 Kaushik’s background is in wushu and he sees his striking as being a decisive factor on Friday,

“The match will go in my favor by TKO in the second round.”

It’s a bold prediction but Kaushik’s confidence is high. The win at ONE: ‘Hero’s Ascent’ was a life changing moment for him and he’s determined to carry that momentum into his next bout,

“I thought very few people in India loved mixed martial arts but I was wrong. After this win, I got attention, followers, respect, love and fame. I am very thankful to them for supporting me, and I will make India proud again in this bout.”

Keanu Subba says serious injury improved his outlook ahead of ONE: ‘Reign of Dynasties’ Part II

Kiamrian Abbasov reflects on winning the ONE welterweight title