Hyun Ji-Jang knows that she has her work cut out to defeat Emi Fujino, but the South Korean standout believes that she has what it takes to accomplish an upset win over the Japanese heroine on her home turf.

The 25-year-old is set to square off with the seasoned veteran for the vacant women’s strawweight championship in the main event of Pancrase 311, which takes place at the Shinkiba Studio Coast in Tokyo, Japan on December 8.

Jang recognizes the enormous task in front of her, but that has not dampened her spirits too much because she is itching to compete again after nearly eight months out of action.

“I’m really excited to fight again, but at the same time, there are nerves. I’m happy for another opportunity to show my skills, and to show that I am training really hard to get better. This is only second match this year, and I want to showcase everything that I worked hard and sacrificed for throughout the years,” Jang said. 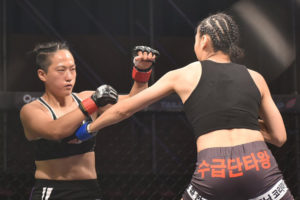 Jang does not view her brief hiatus as a disadvantage. In fact, she is optimistic that it can work in her favor because of the number of improvements she has made to her skill set since April when she dropped a unanimous decision to Geli Bulaong at URCC 77,

“I’ll show all those improvements inside the cage when we fight for the title. Finally, I will get the chance to showcase my skills in front of the Pancrase audience. Last time, my fight was cancelled. Now that the title is on the line, my goal is to win. I’ve really worked hard for this because I know this won’t be easy,” she ssaid.

The Hongjin K-1 Sports Gym representative was supposed to make her promotional debut at Pancrase 308 in the semi-final round of the women’s strawweight tournament against Nori Date, but that match got scrapped after the latter failed to make weight.

As a result, Jang received an outright berth to the tourney finals to square off with Fujino for the available Strawweight Queen of Pancrase trinket. 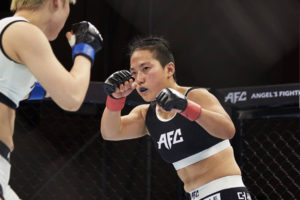 Though she may not be able to match Fujino in terms of experience and size ‘The Samoan Korean’ leans on her explosiveness and agility to cause a ton of problems for her opponent,

“Obviously, she is the more experienced fighter between the two of us. But I am not intimidated by that fact. For me, I’m the faster fighter, especially in striking. My strikes pack more power. I prepared an excellent game plan for this fight, and if my plan succeeds, I believe that I can get the finish in the first or second round,” Jang said..

While Jang expects that she might be outmuscled if Fujino tries to turn their title tiff into a grinding, grappling war of attrition, she is eager to showcase how dangerous she can be when her back is against the wall,

“She should never underestimate me. I know she is dangerous on the ground, but I will make sure that she will have to get down and dirty before she stops me. I am always motivated. I can also be dangerous where she’s good at,” Jang warned.

As driven as Fujino is to perform in front of her home crowd, Jang is likewise fired up to make her mark in Pancrase and demonstrate why she deserves to have the strap around her waist,

“I’ll give everything because this is for all the people who believe in me. I want to show that I deserve my spot to be competing for the title and that I improve every single time. I also want to end the year strong, and I have no plans to lose again. I will do everything to get that win in Tokyo.” 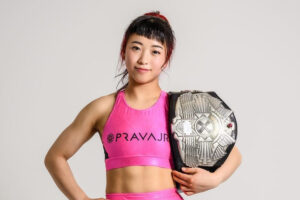 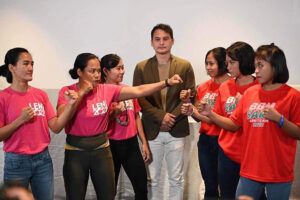