A string of ONE Championship’s brightest Japanese prospects were in action today at Road to ONE 7. The event took place at Tsutaya O-East in front of a limited live audience.

In the main event judo black belt Itsuki Hirata was in action. The undefeated 21 year old is a ONE Championship veteran and has been matched with Miku Nakamura in this atomweight contest.

The charismatic youngster, who has been targeting a place in ONE’s upcoming atomweight Grand Prix, showed effective striking and grappling against Nakamura. Hirata also floored her opponent several times with her clinical judo. 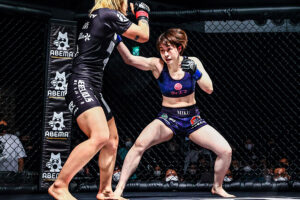 Nakamura, a Shooto regular, battled back gamely in round one but found herself trapped in a guillotine choke. She was able to escape and survive until the bell sounded.

In the second round Hirata upped her intensity and launched Nakamura through the air with a hip throw before transitioning into a scarf hold choke. Instead of trying to make her opponent tap she went to work with ground and pound.

After a series of unanswered punches the referee stepped in at the 2:34 mark. With the win Hirata improves to 4-0 and potentially secures a spot in the atomweight Grand Prix while Nakamura drops to 3-4. 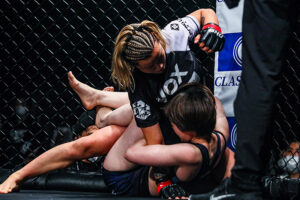 In the welterweight co-main event Takuya Nagata was stopped by Kazuki Kasai in the third and final round. Hayato ‘Mach’ Sakurai’s student chased the Shooto and ONE Warrior Series veteran down and landed a hard knee.

With Nagata on all fours Kasai proceeded to punish him with punches to the head prompting the corner to throw in the towel. With the win he improves to 6-1 while his opponent drops to 9-4-1. 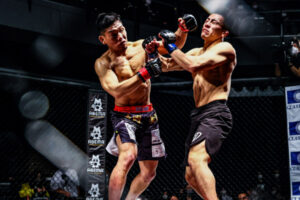 ONE Warrior Series competitor veteran Hikaru Yoshino (9-2) showcased his judo skills to score a split decision win over Shohei Nose (4-2) in their featherweight fight. At lightweight Hirotaka Nakada (2-1) stunned Tatsuhiko Iwamoto (10-7) stopping his opponent with strikes in the opening round.