Jarred Brooks has already beaten Team Lakay‘s Lito Adiwang and wants a crack at Joshua Pacio. He is also upset by remarks made by Mark Sangiao.

The Team Lakay head coach suggested that Brooks had feigned a groin strike during his second round win over Adiwang and the American fired back with an angry response,

“I had him in a front headlock, and you can hear the cup. So I’m like, ‘what are they talking about here?’ you see my face after too. Yeah, he kicked me in the leg with a shin, but he kneed me in the groin.” 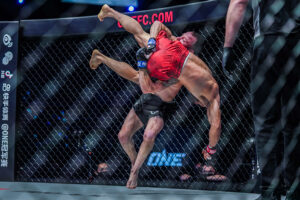 He also points out that this isn’t the first time Team Lakay has come up with excuses after an Adiwang loss,

“Nothing against Team Lakay, okay, but it seems like every time Lito loses, they have an excuse. Like the last time with (Hiroba) Minowa I don’t think Minowa necessarily tapped. It didn’t look like he tapped.”

He thinks that Sangiao’s men lack humility in defeat, The prospect of a fight between Pacio and Brooks is an enticing one as the animosity between the two camps continues to simmer. But before that the UFC veteran needs to get past Hiroba Minowa who he faces at ONE: ‘Only the Brave’ later this month.

He has been vocal about wanting a title shot but Brooks sees this as a sensible matchup,

“Minowa’s a good fight for me. He’s young. I think that would be a good test for me, fighting somebody that’s in the top four that’s compatible. We both beat Lito. We had the same opponent, and he beat Alex Silva too. He beat two of the top guys.”

But Brooks is still very set on challenging for the title and sees Minowa as the last remaining obstacle,

“I think that it’s only right that we do that first and then make that pretty boy (Joshua Pacio) look a little uglier.” Brooks also thinks that with everything that has been said and done Pacio will be under a lot of pressure to beat him,

If Brooks is worried about the #4 ranked Minowa pulling off an upset he isn’t letting it show. The 28 year old has been handed a quick turnaround after this win over Adiwang last November and doesn’t want to wait too long for his title shot.

“I’m one fight away from fighting Josh. I think that Minowa’s number one on the list. Then we go from there, and we got Pacio. And that’s up to him. That’s just a waiting game. I’m ready to fight right after Hiroba, if he wants to go.”