Jarred Brooks feels there is one very important factor in his favour when he fights Lito Adiwang. The American thinks his ‘fight IQ’ is up there with the very best in the business,

“My fight IQ is very, very high. I’ve studied the game since I was pretty much born,” he said.

The fight will be broadcast at ONE: ‘NextGen’ part III tonight. We won’t have long to wait to find out whether Brooks was able to deliver but he sounds excited about the prospect of finally facing Adiwang,

“He’s in the top five and he seems like a gatekeeper in the division right now. I think that beating him would definitely put me in the top five,” he said.

Adiwang is a veteran of five ONE Championship fights and Brooks is eager to test himself against one of the promotion’s established strawweight stars,

“Everybody’s here like ‘Oh, you’re going against Adiwang?’ Like he’s a boogeyman or something like that. But I’m excited to fight him and I’m excited to show everybody that I can beat the king of the division.”

He has fought four times for the UFC and once for Bellator and Rizin. Brooks brings plenty of experience but feels that fighters have to share a cage with him to understand just how dangerous he is,

“People can watch me all they want and have their say on how they think I fight, but at the end of the day, they have to feel me. They have to literally feel me and see how strong I am.” 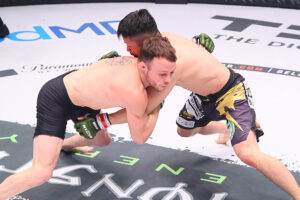 While he won’t be allowed to weight more than 125lbs Brooks believes he will feel much bigger to Adiwang. He thinks the Filipino is going to learn the hard way just how tough an opponent he is,

“I think I’m the best in the division. I’m super strong. If I get a hold of you, I feel like I’m 200lbs on top of you. And any opponent that has gone against me will attest to that.”