Jhanlo Sangiao earned his first ONE Championship win earlier this month and the teenager already has his sighs set on the title. He wants to become the sixth Team Lakay fighter to win a belt with the promotion,

“Fans should always expect the best from me, and it starts with training up until the fight night. I want to show that I too can become a world champion.”

Having got his debut out of the way and had a first taste of fighting overseas Sangiao says he is only going to get better,

“This will further boost my confidence because now I know the feeling of competing inside the circle. In this match, I was just testing the waters first because it was only my debut, but I believe I did my best.” 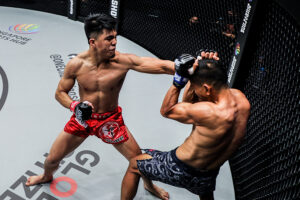 Given that his dad, Mark Sangiao, is the Team Lakay founder expectations were high ahead of the teenager’s ONE Championship debut. He felt the pressure but says it did not affect him negatively,

“Of course, there was pressure on my end, especially before the bout, but I didn’t look at it negatively. I used it as motivation for me to be more pumped up in the back.”

He was clearly hyped up as he made his way towards the cage and Sangiao says he could not contain his excitement,

“I let it all out to unload some pressure. I was just so pumped up that all I could do was scream when I was entering the circle.” He looked cool and composed once the fight started. Sangiao needed less than two minutes to submit Lumihi and says he was in no hurry to finish the fight,

“I was just focused on what I should be doing inside the circle. Whether I finish it early or not, the goal is to win,” he said.

The teenager was delighted and he says his dad was,

“Happy to see that I did my best and executed everything that we prepared for.”

It was the perfect start to Sangiao’s ONE Championship career and he looks set to be the latest in a long line of Team Lakay fighters to star on Asia’s biggest stage.