Ji Yeon Kim faces Molly McCann at UFC Vegas 36 this weekend. The Korean fighter is fighting for the first time in a year and in the buildup she had some interesting things to say about bare knuckle boxing.

Kim told SportsKeeda that she was confident she would be a star in bare knuckle boxing,

The Korean is so confident she believes nobody could beat her in bare knuckle boxing,

“But as of now, even though I’m very interested and I know that I would never lose in a bareknuckle boxing match I still want to maintain my focus with MMA and the UFC. But if the opportunity comes by at the right time, then why not?”

Kim holds a record of 9-2-3 and has fought six times for the UFC. She is currently based in Las Vegas and has been dividing her time between the UFC Performance Institute and Syndicate MMA.

In a recent interview with Sports Keeda she said that she had become friends with some of her rivals during her stay there,

“When I first moved into Syndicate MMA obviously there were a lot of worries about not fitting in but all the fighters, even the fighters that are in my division, in the UFC were more than welcoming me in the team such as JoJo Calderwood. She took care of me, teaching me how people can level up with each other. They were able to show me that system and welcome me with open arms.”

Kim admits she had previously identified Calderwood as a potential opponent, 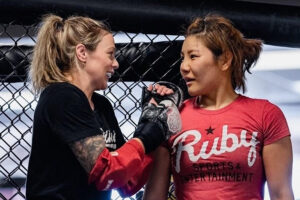 But now she sees the Scottish flyweight as more of a friend than a rival,

“But now that we’re training partners and now that we know each other. Now we get rid of all that and I’ve become friends with her and she’s such a great training partner. Even though she’s ranked higher than me and she has all the skillset that she actually could have hidden just because we’re in the same division. She never did that, she’ll always show what she’s doing and what she’s good at and she’ll also show me those moves so that I can learn. And she showed me the path and if possible, I would never want to fight any one of my teammates,” she said.

Kim feels she has made improvements under the tutelage of Syndicate MMA head coach, John Wood.

“Stylistically I fit him perfectly. We can move around well. He can pick out the details that I’ll always lack and fighting wise I’ve been improving more. Also, to compare it back to Korea – even if there are female fighters, they’re usually strawweights or atomweights. Small weight girls. At Syndicate I have plenty of training partners that are in my weight class, so it worked out perfectly.”

This weekend she will have her new friends in her corner at UFC Vegas 36. She will be hoping to get her MMA career back on track with a win but if not there’s always bareknuckle boxing