Jihin Radzuan faces toughest test yet at ONE: ‘Clash of Legends’

Malaysian heroine Jihin ‘Shadow Cat’ Radzuan enjoyed an incredible 2008, notching a hat trick of victories starting with her ONE Championship debut in March.

But her unbeaten record faces its sternest challenge so far at ONE: ‘Clash of Legends’ in Bangkok on Saturday, when she comes up against six-time national Wushu Champion Gina Iniong (7-4).

It will mark Radzuan’s first professional fight on foreign soil, and the difficulty ahead is not lost on the rising superstar from Kuala Lumpur,

“I’m not going to predict or expect anything from this match. She is the more experienced opponent, and she will put on a performance,” she says. 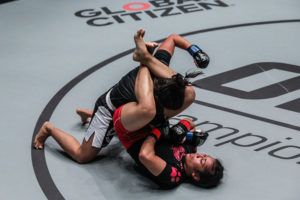 “However, I do not doubt my abilities and cannot look down on myself coming into the match.”

With just four professional fights under her belt, three under the ONE umbrella, Radzuan says she is growing with every fight and will need to move into an even higher gear if she is to get the better of Team Lakay’s Iniong,

“Iniong is a tough opponent, but I’m thankful to ONE for giving me someone like her because if you fight against easier opponents, you’ll never learn. You will not know your weakness and you’ll never improve your game,” she says.

The Shadow Cat is clearly committed to a growth mentality in her approach to her career. Her motivation, she says, is to become…

“A better athlete. My coach (Melvin Yeoh) and I are never satisfied with my performances. We always want to improve.” 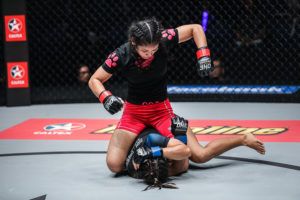 While some fighters might be content to let a string of victories, including her huge points win over Jenny Huang in front of a home crowd in December, go to their heads Radzuan and her team see room for improvement in every aspect of her game,

“Against Puja Tomar I was a bit hesitant, while against Priscilla Hertati Lumban Gaol I came up short with my striking. For the match against Jenny Huang, you can see that I’ve made huge improvements in my striking,” she says.

That ‘room for improvement’ has not been lost on her upcoming Filipina opponent, who has said she thinks striking is Radzuan’s weakness. The Malaysian is undaunted,

“Gina might be saying that based on my previous matches where I did not perform well from my striking, but people close to me know I’ve been active in kickboxing, Muay Thai and boxing. If she chooses to stand and take me on, I’ve got no problem.” 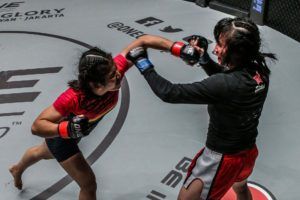 Still, she also admits to feeling the pressure over the past week,

“Training has been okay, both physically and mentally. I’m trying to keep my focus on the fight and not to think about other things. Overall, it has been good,” she says.

Still barely into her twenties, Radzuan is refreshingly honest about her struggles in camp,

“My stamina has been good. It’s just the usual things which are bogging me down. It is my weight and dieting, dieting is not my thing at all. It ruins my mood and gets me angry all the time,” she explains. 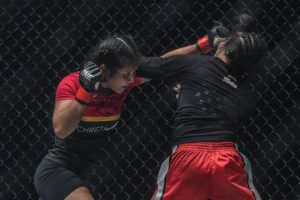 Despite these complaints, Radzuan is, in the main, hugely upbeat about her nascent MMA career.

Her route to her current fame began in her early childhood, when she started practicing martial arts, aged just six. Later, as a teen, she saw South Korean Song Ka Yeon fighter on TV and was inspired to be “just like her”.

Radzuan began training Muay Thai and fought her first bout after just three months. She later went on to win a Wushu World Championship and the MIMMA Women’s Championship.

She turned pro in 2017 and after one fight inked a contract with ONE, making her debut at ONE: ‘Visions of Victory’ in March last year in KL.

She produced a blistering performance, inflicting one of the submissions of the year on her opponent Puja Tomar, a devastating triangle choke that sent the home crowd wild. 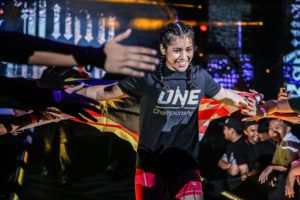 Still, she has had the benefit of a rapturous KL crowd behind her for those previous performances. Of her upcoming bout, she says,

“It is going to be very different as the crowd is not from my country. But thankfully, this bout is not taking place in Manila.”

Instead, she finds herself now in a smog-blanketed Thai capital,

“I heard the haze is bad, so I think I’ll look forward to training there without thinking about other things,” she says.

“If I win, I would love to try the food and experience the city for a bit.”

Regardless, she is promising another aggressive performance,

“This match is going to be way better than the past three. I’m determined to make my country proud and maintain my unbeaten record… I hope all goes well next Saturday.” 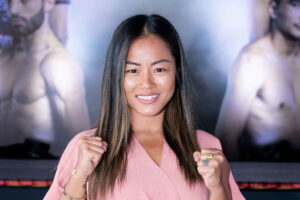 Bi Nguyen plans to take out pent up aggression on Jihin Radzuan at ONE: ‘Big Bang’ (Video)