Jo Arai completed one of the most remarkable comeback stories in the sport when he was crowned Shooto strawweight champion by knocking out Junji Ito at Shooto 0919 on Sunday.

The 24-year-old went on a miserable run of  eight successive losses and was finished on all of these fights. But he is a now a poster boy for perseverance after making it seven wins in a row with  the win over Ito at the Korakuen Hall.

Ito came into the contest as the interim champion but there may have been an element of ring rust for the veteran whose last outing was almost a year ago when he submitted Ryohei Kurosawa at Shooto 1105. He landed left and right low kicks and left jabs in the opening round. Marching forwardsArai was looking to march forward and close the distance. But Ito caught him with a right low kick and a left jab and soon shot for a takedown before kneeing Arai in the face as he stood up. Sarumaru continued to use low kicks and punches to keep Arai at bay.

But the younger fighter soon found a home for the left hook as he avoided another takedown. Ito moved in to let fly with a flurry of punches but left himself open to attack as Arai worked with his back to the cage to wobble the 36-year-old with a big right hand.

Another right hand swiftly followed to put the result beyond doubt as the referee intervened at the 1:50 mark. After getting his career back on track, he now boasts an 11-9-2 record with Ito sliding to 19-9-2.

“Never give up!” said the new champion. “I lost nine times in a row because I wasn’t serious against grapplers. But if I gave up, I wouldn’t wear this belt. I will continue to work hard so that people will see me like this.” 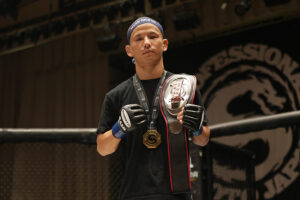 In the co-main event Yamato Nishikawa got the nod from the judges against Shigeaki Kusayanagi. The 19-year-old is now on a ten fight winning streak as his record climbs to 21-3-6 while his opponent slips to 9-12-4.