John Lineker was already ranked at #1 in the bantamweight division before his first round finish of Troy Worthen at ONE on TNT Part III. The only way is up for the Brazilian veteran and he wants to face champion Bibiano Fernandes as soon as possible.

Lineker thinks the third win of his ONE Championship career should be enough to earn him a shot at the Brazilian,

“I’ve shown that I come to fight in the last thee fights. I hope the ONE team can offer me the opportunity to fight with the champion. I’m ready.”

He has clearly given it some thought and believes he would beat Fernandes using the same strategy with which he defeated Worthen,

“I know that (Fernandes) is really tough, I feel it would be a good fight and my strategy would be to shorten the distance as I did with Worthen and not allow him to use his jiu-jitsu with me.” 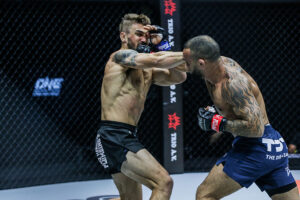 According to Lineker the key to his quickfire KO win over Worthen was an ability to close the distance and keep the fight at close quarters,

“With my coach and we decided I was going to do what I’m good at doing which is boxing, that was my strategy. He was trying to get distance from me and kick but i quickly shortened the distance and that’s how I won the fight.”

After doing some damage with his his body shots Lineker was able to finish the fight with a straight right hand. It was a moment of precision during the storm of violence that the Brazilian always brings and he says it was very deliberate,

“I saw my opponent was hurt when I threw the body punches but I knew he was tough. When I realized he was hurt to the body that’s when I saw the opportunity to throw the right cross.” 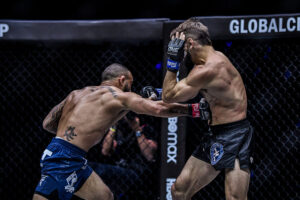 He had originally prepared to face Stephen Loman who would probably have been willing to make it a striking battle. Instead Lineker found himself faced with a wrestler when the Filipino tested positive for Covid-19.

Worthen was very different stylistically speaking but Lineker says he can adapt to any opponent,

“This is my style of fighting, always moving forwards looking for the knockout and my right hand worked well today. I usually can adapt fast, I am always ready so the change at the last minute wasn’t an issue.”

Loman’s status as the Brave bantamweight champion would have made him a worthy opponent even though the Filipino is unranked. Worthen is not in the top five and Lineker wants more of a challenge in his next fight,

“I came very well prepared, I was ready for this fight and now I want to (face) more challenging opponents.” 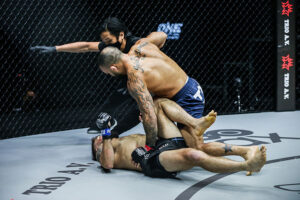 You only need to glance at the current rankings to see where that challenge surely lies. Lineker has his sights set on Fernandes and is very confident he can dethrone the current bantamweight king,

“Whenever ONE calls me I am ready. I would be willing to fight tomorrow. I know what I’m capable of, I know how well prepared I am and I really believe I could beat Fernandes.”