Jomary Torres is starting to really feel a sense of urgency when it comes to her professional career as a mixed martial artist.

Once touted as a breakout star from the Philippines, the 23-year-old Dipolog, Zamboanga del Norte native is desperately trying to avoid suffering her fifth consecutive defeat.

Torres expects to solve her dilemma on Friday when she battles former title contender Jenny Huang at of ONE: â€˜Fire & Furyâ€™. The event is set for the 20,000-capacity MOA Arena in Manila, Philippines.

â€œMy goal for 2020 is pretty simple, and that is to win all my matches. It has been personally tough for me to be on a losing streak. I did my best in training and gave my all during the fights but I keep on coming up short,â€ she said.

â€œIt is the new year, and I will change all that,â€ Torres added. After starting her prizefighting stint with four-straight wins, three of them coming on the ONE Championship stage, Torresâ€™ meteoric rise came to a screeching halt when she tasted defeat for the first time. The Filipina dropping a decision to Priscilla Gaol in September 2018.

Torres would suffer the same fate against Japanese veteran Mei Yamaguchi just three monthâ€™s later.Â 2019 would not be any easier for the Filipina as she absorbed back-to-back submission losses at the hands of Lin Heqin and Jihin Radzuan to push the streak of losses to four.

This series of setbacks prompted Torres to overhaul her entire mindset and approach,

â€œAfter my last loss, I have been reworking my skills from the ground up,â€ Torres shared.

â€œEverything from my striking to my grappling. The coaches and training staff have been working with me non-stop, and I will be showing a new Jomary Torres on the day of the event.â€ 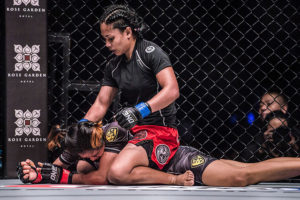 Torres wishes to make a return to the winnersâ€™ circle on the last day of January, but she has to go through Huang first.

Huang is currently in a similar situation to Torres having lost her last five bouts. Â Her fall has been particularly hard given that she once challenged Angela Lee for the atomweightÂ title.

However Huang was unfortunate not to get the nod from the judges in her recent fight with Yamaguchi and Torres is not underestimating her opponent,

â€œJenny Huang is a strong athlete. She was a former title challenger and that means a lot. Sheâ€™s highly trained on the ground, and her striking is good as well. I am expecting that she will try to take me to the ground where she can dominate me, but I will not allow that to happen,â€ she stated. Torres remains optimistic that she will finally put an end to her winning drought. With the chance to make a triumphant comeback in front of her countrymen, she feels that her hard work during training will pay off.

â€œI am 100 percent confident that I will win this time. We both have had it rough in our past matches, and that makes us both hungry and dangerous. My skills have improved a lot, and I canâ€™t wait to give my countrymen a great performance,â€ she assured.