Jorina Baars signs up for the ONE Super Series

Jorina Baars has signed with ONE Championship. The undefeated Dutch fighter looks set to become the first female featherweight on the promotion’s roster.

Baars is the current Lion Fight 147lbs champion. She is best known for a 2014 win over former UFC featherweight champion Cristiane ‘Cyborg’ Santos and has also fought three times for Bellator Kickboxing.

‘Cyborg’ faces Felicia Spencer at UFC 240 next month. But she has had some well publicized differences with the promotion and is believed to be considering her options which could include pro wrestling or a return to the Muay Thai ring.

Baars has made it clear that this is the fight she wants ONE Championship to make,

“I am here in ONE Championship because the best fighters in the world are here. It is an honor to be among so many legends of martial arts. I want to fight the best in the world and I will fight anyone. If the stars are aligned, I would not mind fighting Cris Cyborg again,” she said.

ONE Championship regularly puts on women’s atomweight and strawweight bouts across the spectrum of Muay Thai, kickboxing and MMA. There have also been a handful of female flyweight matches, but there hasn’t been a welterweight match yet.

It remains to be seen who matchmakers will find to face Baars but ‘Cyborg’ seems to be high on the agenda. 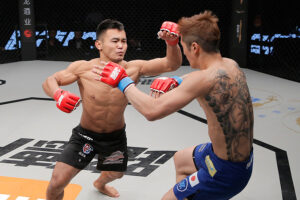