Juscelino Ferreira pulled off a stunning upset in his sophomore appearance under the UAE Warriors banner, knocking out lightweight heavyweight champion Tarek Suleiman in a 198lbs catchweight contest.

Both men collided in the main event of UAE Warriors 11, which took place at the Mubadala Arena Hall in Abu Dhabi on Friday, June 12th with no audience in attendance.

The 34-year-old Brazilian may have been out of action for over a year, but there were no signs of ring rust as he closed the show with a stunning one-punch, first-round knockout of his Lebanese counterpart with 1:25 left on the clock.

Right off the bat, Ferreira quickly established his range using his jabs to keep Suleiman on the outside while having the liberty to uncork his heavy right hand whenever he wanted.

While Ferreira was effortlessly picking his shots and defending takedown attempts, Suleiman swung a leg kick in his opponent’s direction. However, the Para, Brazil native was already a step ahead. After launching a wild overhand right that merely grazed his foe, Ferreira had his follow-through prepared and sent Suleiman to the canvas with a perfectly-timed left hook to the jaw.

In a show of character and concern, Ferreira pulled back on follow-up punches as the referee waved off the bout and awarded him with the knockout victory.

With the impressive victory over Suleiman, Ferreira improved his professional record to 11-2 and extended his winning streak to four matches.

On the other hand, Suleiman downgraded his win-loss slate to 9-7. He has gone 1-2 in his last three outings. 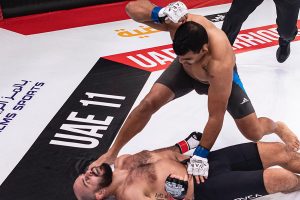 In the co-headliner of the evening, Juares Dea (7-2) of Cameroon put together an all-around performance to score a dominating unanimous decision win over Brazilian featherweight Andre Pinheiro (10-3).

Meanwhile, Yousef Al Husani (1-0) prevailed over Mohamed Allam (0-1) in a battle of prizefighting debutants, submitting his compatriot with a rear-naked choke in the first round.

Alphonse Viny Bessala (1-0) left a lasting impression in his maiden UAE Warriors appearance, getting the job done in 22 seconds by shutting the lights off on Mohammad Kareem Aljnan (0-2) with a left hook.

Ahmed Al Darmaki (2-6) clinched his second win in the promotion by forcing newcomer Kagimu Ivan Kigga (1-0) to tap with a standing guillotine choke in the opening frame.

UAE Warriors 11, Abu Dhabi, June 12th
Juscelino Ferreira def. Tarek Suleiman via KO (Left Hook) at 3:35 of round one
Juares Dea def. Andre Pinheiro via Decision (Unanimous)
Ahmed Abdelraouf vs. Mostafa Ibrahim Radi ended via Draw (Majority)
Yousef Al Husani def. Mohamed Allam via submission (Rear-Naked Choke) at 1:23 of round one
Marcos Paulo Costa def. Abdelhakim Wahid via Submission (Arm-Triangle Choke) at 2:03 of round one
Ahmed Al Darmaki def. Kagimu Ivan Kigga via Submission (Guillotine Choke) at 3:25 of round one
Ibrahim El Sawi vs. Iuri Fraga ended in a no contest
Alphonse Viny Bessala def. Mohammad Kareem Aljnan via Knockout (Left Hook) at 0:22 of round one
Ben Lucas vs. Ibrahem Kandil ended in a no contest