After beating Danny Kingad at ONE: ‘Winter Warriors’ Part II former champion Kairat Akhmetov made it very clear who he wants to fight next. The Kazakh has his sights firmly set on Demetrious Johnson.

Akhmetov was due to face Kingad twice before but the bout fell through. As it transpired, the Filipino faced Johnson in the final of the ONE flyweight Grand Prix but the Kazakh still rues missing an opportunity to face ‘DJ’ and believes that now is the time to put that right.

“I’ve been preparing for this for a long while. Unfortunately we had to postpone the grand prix fight because I broke my arm. But in the finals (I would have been) happy to meet Demetrious Johnson and the time has come for me to meet him here in the ring and I hope I’ll be given this possibility to meet DJ here in a fight and to show my Kazakh spirit. And I think for now, I’ll be contender number one for the title.” 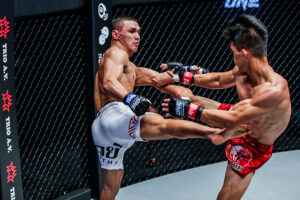 The Tiger Muay Thai fighter has excellent wrestling and took Kingad down early in the first round, showing excellent top control to keep the Team Lakay man under pressure until the bell.

The second stanza saw Kingad pop off some solid knees inside the clinch. The Filipino thew a wild right hand and it was telegraphed with ease. Akhmetov ducked underneath it to secure a double leg as Kingad again succumbed to lengthy spells of top pressure.

Kingad sought to mix things up and use his Wushu early in the third but was soon on the end of a stout left hand which set up another takedown for Akhmetov. When the pair found their feet the 26 year old got off some good knees to the body followed by a lovely right elbow.

He went on to land some more good knees against the Circle wall but soon found himself back down on the canvas in what was a fairly dominant overall display from Akhmetov. He takes his record to 27-2. Kingad slides to 14-3. Earlier in the night Kwon Won Il (11-3) needed less than two rounds to finish former bantamweight champion Kevin Belingon (20-9). A left hand to the liver did the damage for the Korean.

Stephen Loman (15-2) got his ONE Championship career off to a good start. He stopped Yusup Saadulaev (20-6-1) with a left hand in the latter stages of the opening round in their bantamweight bout.