Keisuke Sasu snatched away the Pacific Rim featherweight title from Takashi Nakayama on Saturday. The fight headlined the Shooto 0919 card in Tokyo, with a limited audience in attendance at Shibuya Tsutaya O-East.

The opening round of the headliner was uneventful for the most part until Nakayama landed a combination that put the title challenger on his back. With perfect timing, Sasu trapped the arm and swung his hips around to secure a deep submission.

In a game of inches, Nakayama was able to wiggle his arm out and regain top position to end the round on top. 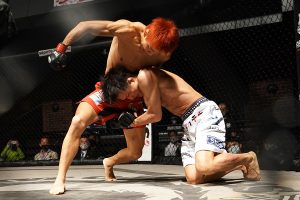 Going into the second round, Sasu seemed to have the momentum and it showed instantly. Off a lazy low kick, he connected with a crushing counter left hand putting Nakayama on queer street.

Sasu recognizing his opportunity to finish the fight, he barreled in with a flying knee which partially landing on the side of the skull. Hammerfists and punches to the head ensued with Nakayama looking for any way to catch his breath.

That did not come and after some elbows and punches from side control, the referee decided he had seen enough and stopped the contest.

With his fifth straight win under the Shooto, Sasu (7-1-1) has his first professional title wrapped around his waist. Nakayama (8-4-1), on the other hand, loses the belt in his first title defense and goes to the back of the line in this stacked featherweight division.

The co-main event was a grappling clinic from Nobuki Fujii (21-11-3) who scored a unanimous decision win over Joji Goto (10-4-1). The first two rounds were back and forth and provided plenty of entertainment.

Toward the end of the middle stanza, Fujii turned the tide in his favor by taking down his opponent and taking back control. The Alliance Fight Team staple almost finished a rear-naked choke but Goto was able to tough it out until the buzzer rang to save him.

Fujii went back to his comfort zone at the start of the third and final round. He dipped for a takedown early and scrambled to the back with ease.

Again, he went to work for the choke. Trying to make the proper adjustments to finish the fight, Fujii looked to be tiring himself out while Goto was able to hang tough and eventually get wrist control.

He waited for the right moment and spun his way out and got the fight back to the feet.Â With the fight slipping away, Goto swung for the fences and unloaded everything in his arsenal.

Yet Fujii clinched and dug deep to get the takedown and stay out of danger. They ended the round swinging wildly at each other for the last ten seconds. 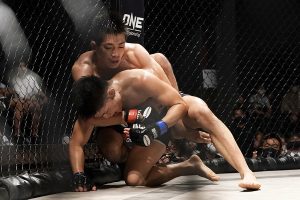 The rest of the night was filled with violent first-round knockouts that were entertaining, to say the least.

Yuto Sekiguchi (9-7-6) snapped a two-fight skid by landing a devastating overhand right on Yo Otake (1-6) that had him sleeping on the canvas.

After a decent back and forth to open the fight, Junji Ito (18-8-2) attacked with a barrage of punches that had Tateo Iino (14-7-1) out against the fence, which prompted the referee to jump in.

In a battle of the power punchers, Nobumitsu Tyson (13-5) picked up an impressive first-round knockout when he connected a left hook counter while Max The Body (8-6) ran in swinging wildly.

After being tossed around for the first couple of minutes, 17-year-old Yamato Nishikawa (10-5-3) locked up a triangle choke against Asuka Tsubaki (2-3) and earned the first submission victory of his career. Nishikawa extends his win streak to five straight meanwhile Tsubaki loses back to back for the first time. 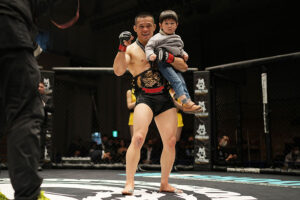