It seems to be common for titleholders from one division to either move up or move down in weight with the goal of capturing a second belt to bolster their stature in the sport. UFC lightweight champion Khabib Nurmagomedov is not a big fan of the popular trend.

Ahead of his title unification bout against Dustin Poirier at UFC 242 in Abu Dhabi, Dubai this Saturday, the 30-year-old native of Dagestan, Russia believes that the path he is currently on will establish a greater legacy,

“I think if you want to improve your legacy by changing weight classes, I don’t think this is helpful for you,” Nurmagomedov said during a media teleconference last Friday.

“Only one thing helps you. You have to beat up-and-comers. What about when you beat tough opponents and you’re still undefeated more than the others. I think this is going to improve your legacy,” he added. The ‘champ-champ’ trend hit a fever pitch when Conor McGregor held both the lightweight and featherweight titles at the same time after defeating Eddie Alvarez via second-round technical knockout in November 2016.

Daniel Cormier and Amanda Nunes have both accomplished the same feat a few years later. Flyweight kingpin Henry Cejudo is a more recent example, he captured the vacant bantamweight crown at the expense of Marlon Moraes this past June.

Simply looking at Nurmagomedov’s credentials and skill set as a professional fighter you can see he poses a potential threat to Kamaru Usman and the rest of the athletes in the 170lbs weight class.

However, he downplayed the idea of making a 10lbs shift, arguing that keeping a zero in the loss column and dominating arguably the deepest weight class in the UFC outweighs all other considerations,

“If you lose couple times and you win one title, second title, you lose again, and then you win third title, this does not make you great. My opinion, when you’re undefeated long time and you never lose, this is when it’s the real thing,” Nurmagomedov stated. 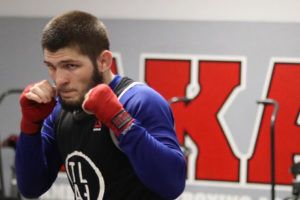 The last time Nurmagomedov has been seen wearing a pair of four-ounce gloves was in October 2018 when he defeated McGregor via fourth-round submission. He then got suspended for nine months after instigating a post-fight brawl with the Irishman’s team outside the cage.

Nurmagomedov has plenty of work to keep him busy at lightweight, including the long-awaited clash with Tony Ferguson. Though it appears that he will have his hands full if he wins this weekend, the Russian combatant acknowledged that his days in the sport are numbered.

When asked how much longer he plans to compete, Nurmagomedov conceded that there are only a few matches left in him before he calls it a career,

“I’m not a young fighter. I’ve already been champion for years. I’ve already defended my title. This is my second defense. Of course, I don’t have a lot of fights ahead because I don’t want to fight when I’m 40 years old. This isn’t my plan. We’ll see,” he revealed.

Nurmagomedov clarified that he is not going to decide alone when he comes across the thought of retiring, sharing that he will rely on those around him to help him make an informed, level-headed choice.

There will come a time for Nurmagomedov to hang up the gloves for good, but for now, his sights are locked in on extending his reign over the UFC lightweight bracket,

“Right now, I’m focused on the competition because I have too much fire inside me,” he assured.