A featherweight title shot is on the table for Kim Jae Woong if he can beat Martin Nguyen at ONE: ‘Revolution’. The Korean is very confident his next bout will be for the belt.

“I have more skills in striking so I think I can beat him with ease,” he said. 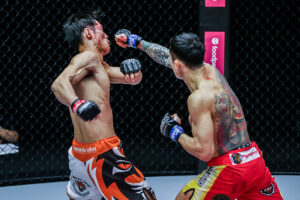 Woong isn’t trying to be disrespectful though even if it might come across that way. He is just supremely confident and actually has a lot of time for his opponent,

“I think Martin Nguyen is a great fighter and a role model, and I consider him as one of the best. He’s a fighter who I respected and enjoyed watching even before I joined ONE Championship.”

He is used to taking on opponents who want to get the fight to the ground so Woong is glad to be facing someone who will be happy to go toe to toe with him,

“All my previous opponents were grapplers, but this time, the opponent is a striker. I actually prefer striking, so I think this will be an exciting match between strong hitters,” he said. Woong admits he is a closet Nguyen fan. But he thinks having followed the Australian’s career for several years might give him the edge,

“I knew Martin even before I joined ONE Championship so I know his strengths and weaknesses a lot more than he knows mine. For a long time, I have contemplated on how to beat him, so this time, I am 200% confident,” he said.

Woong only has three areas he wants to target but the Korean is confident Nguyen will be unable to withstand the onslaught,

“I will make sure Martin Nguyen’s chin, temple, and abdomen are the only three parts that I am going for. And with these three parts, I will weaken his mentality by making him  give up.”

At least Nguyen knows what to watch out for. Will the Korean be able to put his money where his mouth is and finish the former featherweight champion? We will find out on September 24th!