Kleber Koike Erbst will be back in action at Rizin Landmark 3. The promotion’s number one featherweight contender has been booked for a non title fight with Kyohei Hagiwara which will headline the event on May 5th.

As is standard with the ‘Landmark’ series the location has not been disclosed. Erbst (29-5-1) is riding a five fight winning streak and has submitted four opponents in succession in the Rizin ring.

He has seen his Bonsai Jiu Jitsu teammate Roberto de Souza become the Rizin lightweight champion but is still waiting for his shot at the belt. Earlier this month Yutaka Saito challenged for the featherweight strap despite having lost his previous two fights.

Hagiwara (6-5) is coming off a submission loss at the hands of Satoshi Yamasu at Rizin 34. But he has won five of his eight fights for the promotion heading into this catchweight contest which is set for 68kgs. 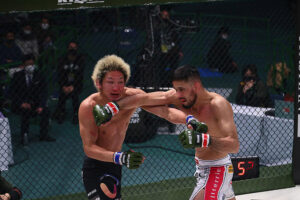 In the co-main event two 135lbs veterans will face off. Kazuma Kuramoto (9-2) was eliminated from the promotion’s bantamweight Grand Prix by Erbst’s teammate Alan Yamaniha but bounced back to beat Kenji Kato at Rizin Trigger 2.

Mamoru Uoi (23-11-5) has lost five out of his last six fights. The Shooto veteran’s only recent win came at the expense of Hiroki Yamashita who he stopped with a soccer kick at Rizin Trigger 1.

The card also features a pair of featherweight fights. Tetsuya Seki (14-8-1) has been matched with Akira Haraguchi (6-2). Both men are coming off wins, the former against UFC veteran Caol Uno.

The other 145lbs fight on the card pits Kota Miura (1-0) against Felipe Masoni (9-4). The Brazilian will be the only non Japanese fighter to compete on the card,