The veteran is now undefeated in his last six fights having racked up four wins and two draws since losing to Motonobu Tezuka in 2019. His opponent came into this contest on the back of two straight victories but hadn’t fought in a year.

Onojima closed the distance early and unleased some body kicks before switching his attack to land a slapping low kick to Fujji’s lead leg. The 32-year-old sought to close the distance and doubled up on his jabs but his opponent caught him with a body kick on the counter. 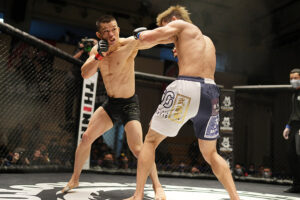 The Tokyo native then shot for a takedown but Onojima took a step back to defend as the pair locked up in the clinch. Fujji ripped a shot to the body before being pushed up against the cage.

The referee broke them up only for Fujii to shoot again with 25 seconds left. Once more Onojima defended and planted a stout right hand before the buzzer.

Undeterred, the Alliance man shot for the double leg early in the second round. Onojima sprawled before pushing his opposite number back against the fence. 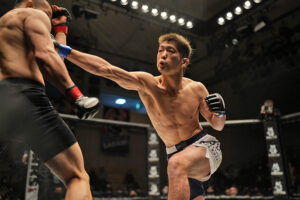 Fujii tried for the takedown again but with no success. It was Onojima who eventually scored the first takedown of the contest as he successfully pushed his opponent to the canvas.

As they found their feet, both fighters began to let their hands go mid-way through the round but it was Onojima who landed the better shots. He unleashed a big left hook before the exchange was broken by another failed takedown attempt from Fujii.

Clearly in the ascendency, Onojima uncorked a sweet left uppercut before the end of the round. 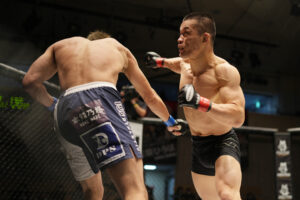 Fujii landed a knee on the inside in the final stanza but got caught with a stiff jab counter. He did find joy with his own jab as both fighters landed punches but again opted to shoot in for another takedown only to be thwarted by Onojima again.

The third round was certainly the most engaging with more exchanges on the feet. After several futile attempts, Fujii finally landed a single leg and quickly went to sink in the rear naked choke.

It appeared to be locked in for a moment but Onojima was able to escape.  And with that unsuccessful submission attempt Fujii’s chances of winning the fight evaporated.

The judges all voted in favour of his opponent who wins the Pacific Rim Bantamweight title and improves to 16-5-3.  Fuji drops t0 18-12.