KSW announced today that it was removing Russian fighter Shamil Musaev from an upcoming card in protest at the invasion of Ukraine. The Polish promotion appears to be the first from the world of combat sports to make this stand.

Due to the Russian Federation’s invasion of Ukraine, KSW has made a tough, albeit ethically justifiable, decision to cancel Russian fighter Shamil Musaev’s fight, which was scheduled for KSW 68 on March 19th in Radom.

Musaev (15-0-1) is one of the top welterweight prospects on the planet. Apparently he was scheduled to compete at KSW 68 on March 19th although a matchup doesn’t appear to have been officially announced.

Russia has been sanctioned by several sporting bodies. Multiple countries announced they would not be willing to play football against the nation although FIFA stopped short of issuing an actual ban.

Earlier this week the International Olympic Committee urged sporting bodies to exclude the country’s athletes and officials from international events. KSW appears to have taken this advice on board, will anyone else from the MMA world follow? 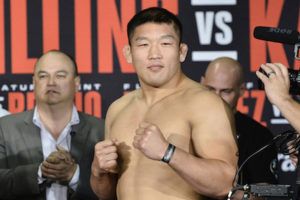