Lin Heqin will return to MMA at ONE on Prime Video 1 this Saturday. The Chinese fighter is coming off a win in a kickboxing contest but will return to the sport where she really made her name.

Heqin has a background in sanda but has been competing in MMA since 2015. She has won 15 out of her 19 fights and will be taking on Itsuki Hirata in Singapore on Saturday morning (local time).

The Japanese fighter is primarily a grappler and Heqin knows this will be a clash of styles,

“I think every athlete in ONE Championship has their own professional skills, so I will take every fight seriously. Hirata has a totally different style to me, but I think it will be an excellent match,” she told ONEFC.com.

Heqin was outwrestled by Ritu Phogat in her last MMA fight. Hirata has a similar skillset although she has a judo background and is better known for her trips, sweeps and submissions than her takedowns.

Heqin knows the sort of threat her opponent poses but also sees areas of weakness which she can exploit,

“I think Hirata is good at grappling. She is regarded as one of the best grapplers of all the female athletes, but her striking is her weakness, as well as distance control.”

Hirata is coming off the first loss of her entire career although she was outgrappled by a submission specialist. That loss to Jihin Radzuan was the first blemish on a record which had remained perfect throughout the amateur and professional ranks.

Heqin was an interested observer and feels that Hirata’s ‘weakness’ was exposed by the Malaysian,

“I saw her weakness in that match. It was her first defeat, but I will show her by my actions that it will not be the last one.”

Hirata travelled to New York to prepare for this fight and Heqin knows she will have made some improvements. But the Chinese fighter warns that she too has been making the necessary adjustments,

“I know (she) has worked hard for this fight, and she continues to work on her jiu-jitsu skills, but I am not idle. I have worked as hard as anyone, so I am confident for the fight.” 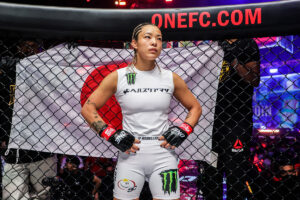