Lito Adiwang is facing a UFC veteran at ONE: ‘NextGen’ Part III. Jarred Brooks fought inside the famous octagon four times before signing with Rizin.

The Filipino sees it as an opportunity to prove that ONE Championship’s fighters are better than their UFC counterparts, Best in the division

Brooks won two and lost two of his UFC fights. But he was competing as flyweight so we will never know how he would have fared if the promotion had a strawweight division.

ONE Championship is the only major promotion in the world actively promoting male strawweight fights so if Adiwang wants to face the best in his division he is already in the right place. Brooks hasn’t lost a fight since 2018 and won his final UFC bout so he should be a worthy adversary, even if both men are currently unranked.

Adiwang and Brooks have had some harsh words for one another in the buildup to this fight, with the Filipino insulting his American adversary. He was in respectful mode on this occasion and didn’t have anything negative to say about the UFC veteran. 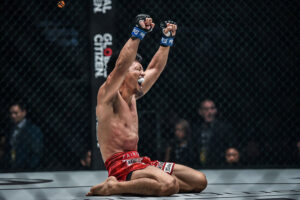 In fact Adiwang didn’t have anything negative to say about anything and was in upbeat mode. The fight was originally booked for ONE on TNT Part II and he is just happy it is finally happening,

“I’m just very excited that, finally, this fight is happening. Let’s give a good show and let’s show that we’re the best in this division.”