Manon Fiorot and Xavier Alaoui put on dominant performances to claim titles at UAE Warriors 14. The event took place in Abu Dhabi and had bantamweight and flyweight belts on the line.

Fiorot was competing for the latter against Gabriela Campo in the main event. The French fighter defended well against a takedown attempt and clipped the Argentinian.

Fiorot then took the fight to the ground and commenced to punish her opponent. She went from side control to full mount. As the Argentinian turned her back she wrapped the neck up to try for a choke. 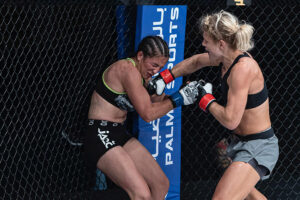 Campo escaped the choke and stood up but Fiorot put her to the canvas once more. After some punches from top position, they stood back up and continued the fight.

This is where Fiorot was most dangerous. She picked her shots and was landing at will with straight punches and kicks to the midsection.

While Campo covered up along the fence, Fiorot swarmed with a barrage of punches until the referee had to step in to stop the fight. The newly crowned UAE Warriors flyweight champion improves to 5-1 while her opponent drops to 6-2. 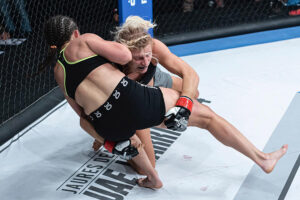 Xavier Alaoui put on a clinic against Jaures Dea and captured the inaugural bantamweight title in the co-main event. The Moroccan went in as the favorite and proved it by formulating and executing a clever game plan.

They entered the cage and traded jab immediately. A couple of inside leg kicks got Alaoui into the flow and he was able to connect with a solid right hand that rocked his opponent.

Alaoui followed him to the canvas and peppered Dea with punches and elbows from half guard. The Cameroonian eventually swept his foe and escaped but continued to take punishment, eating a head kick and a solid elbow off the clinch.

Alaoui continued his assault into the next round with the inside leg kicks, overhand rights, and head kicks. Toward the end of the second, he completed a takedown, moved to side control to drop down punches.

When it looked like Alaoui was in complete control, Dea came into the middle frame with urgency and started punishing his opponent’s body with heavy kicks. But the Moroccan took the momentum back with a takedown and ground and pound.

In the final five minutes, Dea was in desperation mode but couldn’t do anything to turn the fight around. He pushed forward and swung for the fences but Alaoui stayed out of trouble to take the decision win

South Korean lightweight prospect Ho Taek Oh (7-2-1) also made a successful promotional debut by weathering the storm early and tapping Ronald Girones (7-2) in the third round with a triangle choke.