There are two less fighters representing Asian MMA on the UFC roster. Mark Striegl and Zhu Rong have been victims of the latest cull by the promotion with both men removed from the roster this week.

Striegl was a star in Asia before signing with the UFC. He fought for Legend FC, ONE Championship and the URCC becoming the featherweight champion with the latter promotion.

But his stint with the UFC has not been so successful. The Fil-Am fighter has lost two out of two in the octagon, getting stopped by both opponents.

At UFC Fight Island 6 in 2020 he was matched with Said Nurmagomedov. Striegl was stopped inside two minutes and suffered serious facial injuries which left him on the sidelines for over a year.

Said Nurmagomedov gets it done EARLY in R1 👏 #UFCFightIsland6 pic.twitter.com/va3ad0gTVB

In February he was matched with Chas Kelly at UFC Vegas 48. This fight ended in the second round with Striegl against stopped by strikes on the ground.

Rong does have a UFC win to his name, unlike Striegl. The Chinese fighter stopped Brandon Jenkins in the third round at UFC Vegas 37.

The 22 year old declared himself China’s answer to Jon Jones. But losses to Rodrigo Vargas at UFC 261 and Ignacio Bahamondes at UFC Vegas 49 somewhat undermined this statement.

With one win from his three fights Rong can consider himself unfortunate to have been handed his walking papers. Particularly when the promotion is busy signing up Chinese fighters for the Road to UFC event which starts in Singapore next month.

#UFCVegas49 Official Result: Ignacio Bahamondes (@JaulaBahamondes) defeats Rongzhu by Submission due to a Guillotine Choke at 1:40 in Round 3.

Rafael Dos Anjos lost his first two UFC fights. But the Brazilian was given another chance and never looked back, going on to capture the lightweight title and remaining on the roster for another 13 years, he has a fight against Rafael Fiziev booked.

At the age of 22 Rong should have his best days ahead of him. There is plenty of time for the Chinese fighter to resurrect his career although he will have to find a new promotion with which to do it.

By contrast Striegl celebrates his 34th birthday next month. With the URCC rarely putting on events it will be interesting to see where he lands and whether he wishes to continue with his competitive career, 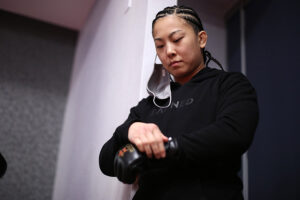