Mikey Musumeci  and Cleber Sousa will have the opportunity to become ONE Championship’s first ever submission grappling champion. The two flyweights will go head to head on September 30th.

The inaugural flyweight grappling title will be on the line when the two face off for the third time at ONE on Prime Video 2. Chatri Sityodtong announced the matchup on Facebook just now:

Musumeci has already made his ONE Championship debut. He made quick work of MMA veteran Masakuzi Imanari in a catchweight contest, submitting him with a rear naked choke in the opening round.

Sousa will be making his promotional debut but he already holds a win over Musumeci. They faced off twice in 2007 and shared a victory apiece with neither man able to secure the submission.

As announced earlier today Angela Lee will be challenging for the strawweight title for the second time on September 30th. She takes on Xiong Jing Nan in the main event of ONE on Prime Video 2.

Seo Hee Ham had been expected to challenge the Hawaiian for her atomweight belt. But instead Lee will be moving up in weight to take on Xiong in a trilogy bout that will be broadcast live on Amazon Prime:

The two previous encounters between Lee and Xiong have both taken place in Tokyo. But this bout is set for the Singapore Indoor Stadium in a show that is set for Saturday morning (local time).

The first fight at ONE: ‘A New Era’ was for Xiong’s strawweight title. The Chinese fighter stopped Lee with a body shot in the fifth round, handing her the first loss of her entire career.

The rematch took place at ONE: ‘Century’ and was for Lee’s atomweight belt. This time it was the Hawaiian who would claim a fifth round victory, submitting Xiong with seconds remaining in the fight.

Lee appears to have already started bulking up in preparation for her move to the strawweight division. The 26 year old made a triumphant comeback at ONE: ‘X’ earlier this year, submitting Stamp Fairtex in the second round.

Meanwhile Xiong is coming off a lopsided decision win over Ayaka Miura at ONE: ‘Heavy Hitters’ in January. She will have been watching ONE: ‘X’ with interest, because Lee was badly hurt by a body shot in the opening round.

It will be interesting to see if Lee is making a permanent move to strawweight or intends to continue competing in both divisions. ONE Championship has had several fighters hold two titles concurrently including Aung La Nsang, Martin Nguyen and Reinier de Ridder.

ONE on Prime Video 1 is set for August 27th and will be headlined by a flyweight title rematch between Adriano Moraes and Demetrious Johnson. There are currently five of these fight cards on the schedule and they look set to feature some of the biggest names on the roster.

ONE on Prime Video 3 will take place in Tokyo on November 19th. No bouts have been confirmed for this card but Aung La Nsang and Yushin Okami are in negotiations to fight one another.

It will be interesting to see what lies next for Seo Hee Ham. The former Rizin super atomweight champion had been expected to challenge for the atomweight title next, but it looks like she will have to face at least one more contender before getting her shot at the belt. 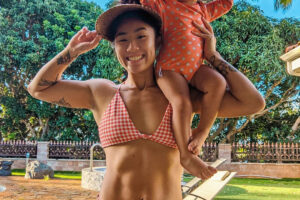