Nong-O and Petchdam in action at ONE: ‘Warriors of Light’ open workout

ONE: ‘Warriors of Light’ is set for Impact Arena on May 10th and the card is stacked with Muay Thai and kickboxing bouts, including two title fights.

In total there will be six Thai fighters on the card and they were all in action yesterday, hitting pads in front of the media at About Studio in Bangkok. 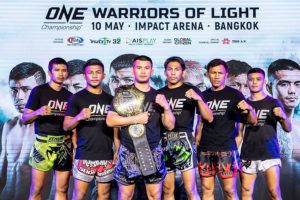 Nong-O also headlined the last ONE Championship event in Bangkok and will be making the first defence of the belt he won that night,

“This event proves that Muay Thai is one of the best martial arts in the world. It gives us a chance to showcase our discipline through our hard work. Representing Thailand on the global stage is a huge honor for me. I know my opponent trained very hard and is motivated to share the stage with me. But every day I get better and better and I continue to improve as a fighter. I plan to show all of my improvements and come into this fight with my best. I will leave the stadium in front of my hometown fans with the title around my waist and still champion,” he said. 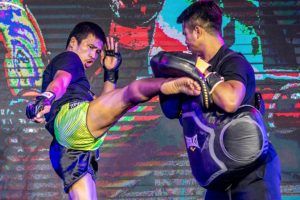 Like Nong-O, Petchdam has won all of his matchups in the ONE Super Series to date. He’s also earned a reputation as an entertainer thanks to some eccentric entrances and highlight reel KOs.

The Muay Thai veteran is challenging for a kickboxing title but is confident of victory on May 10th,

“This is a big opportunity for me to prove that I am the best in the world in what I do. All of my efforts and the trials in my career have led up to this point and I am ready to seize the moment. I’ve had a tremendous training camp and I feel I am in the best shape of my life. Competing in Thailand, in front of my friends and family, I know it will give me added strength.” 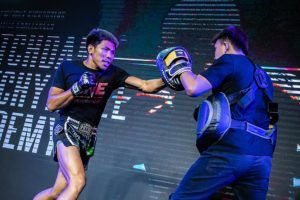 The other Thai fighters on the card are Rodtang Jitmuangnon, Singtongnoi Por Telakun, Superlek Kiatmoo9 and Pongsiri Mitsatit. The latter is competing in MMA while the rest all have Muay Thai fights.

Before transitioning to MMA he was a Muay Thai fighter and Ponsgsiri, who faces Robin Catalan on May 10th, was well and truly starstruck,

“Performing here today alongside these legends of Muay Thai, it is an absolute honor for me. Just standing here, it gives me great pride and joy. I am truly humbled to be in the presence of these amazing athletes. I know I also carry the pride of Thailand and I am prepared to do my absolute best to get the victory.”