Pacquiao cruises past deluded Broner to set up Mayweather rematch

Manny Pacquiao’s 70th fight will not live long in the memory. That’s largely because opponent Adrien Broner was under the illusion he could win a decision without ever really trying to engage or attack the eight division world champion.

Broner took the opening round off at the MGM Grand in Las Vegas. He seemed content to give Pacquiao a head start on the scorecards and this theme continued throughout the first nine minutes of the fight as the American showed some sharp defensive skills but completely overlooked the offence.

At the start of the fourth Broner landed a solid right hand as Pacquiao’s combination punching failed to find a meaningful target. The American looked to have the measure of his opponent in the fifth but seemed reluctant to throw actual punches.

Pacquiao repeatedly scored with straight left hands to Broner’s body as he looked to defend his WBA 147lbs title for the first time. The challenger was trying to time the attacks and counter with left hooks but couldn’t find the target as the 40 year old got in and out fast. 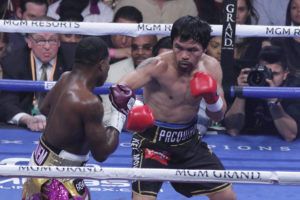 A one-two from Pacquiao snapped Broner’s head back in the sixth although the four division world champion did land a left hook late in the round. The action intensified in the seventh as the champion trapped his opponent in the corner.

Broner was backed up against the ropes and those slick evasive skills appeared to have completely deserted him as Pacquiao unloaded with power shots. They briefly separated but the congressman scented blood and teed off again with the challenger a static target.

Having exerted himself in the seventh it was no surprise that Pacquiao’s pace slowed in the eighth. But Broner declined the invitation to seize the initiative and spent most of the round backtracking, gifting the champion what was probably a much needed rest.

In the ninth Pacquiao seemed reenergized and Broner had to grab his opponent’s leg to stop him teeing off again after finding himself trapped in the corner. Another one-two from the Filipino connected with the left hand doing some real damage. 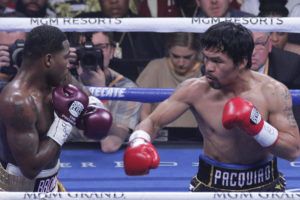 Broner was hurt and found himself backed up against the ropes again just using a high guard to minimize the damage. Eventually he was able to slide out but Pacquiao was in complete control and looked to have amassed an unassailable lead on the scorecards.

Pacquiao landed another straight left hand to the body at the start of the tenth as Broner finally started to find a home for his right hand, although he was still struggling to land more than a handful of punches per round.

At the start of the 11th Broner showed some overdue aggression but Pacquiao responded with a flurry of punches that didn’t do any real damage but put the American on the back foot yet again.

Going into the final round it was clear to everyone in attendance that Broner needed a knockout. But he showed a complete lack of urgency, allowing Pacquiao to chase him all around the ring in the closing seconds of the fight.

Bizarrely Broner decided to celebrate as if he had won, and appeared to be under the impression the judges would award him the victory. In the end the margins were slightly closer than expected, with the fight scored 117-11 and 116-112 (x2) in Pacquiao’s favour. 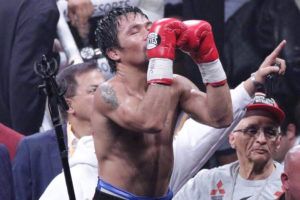 Pacquiao improves to 61-7-2 while Broner drops to 33-4-1. At ringside was Floyd Mayweather who studiously ignored the question when asked whether he wanted to rematch the Filipino, although the fight looks inevitable.

Broner has hoped for a career defining performance and in many ways that’s exactly what it was. He demonstrated the sort of speed, accuracy and defensive skills that could have caused Pacquiao real problems but fought with absolutely no sense of urgency or desire.

This was the result Pacquiao wanted although the performance was nowhere near as impressive as last year’s stoppage win over Lucas Matthysse which won him the belt. A bumper payday against Mayweather awaits but he will be a huge underdog in that fight.