Petchmorakot Petchyindee did just about enough to hold on to his featherweight Muay Thai crown at ONE 157 in Singapore on Friday. Jimmy Vienot gave the Thai arguably his toughest test since winning the belt in 2020.

The Frenchman had a three inch height advantage and used his range brilliantly in the first two rounds. The 26-year-old landed with single leg kicks and body kicks while using the teep to keep the champion at bay.

When the Petchyindee star looked to respond with kicks of his own he frequently found his efforts caught as he was swiftly dumped to the canvas. Vienot dumped Petchmorakot to the ground on five occasions in the second round alone. 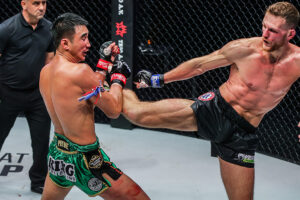 The Thai was showing damage on his lead leg but rallied in the third with good forward pressure and landed knees in the clinch. He then scored a crucial knockdown in the fourth as he caught the newcomer with a clean right hook.

It proved to be a pivotal shot and one that ensured that the belt stayed in Thailand as the 28-year-old sealed his third successful defense of the strap despite a lackluster final round. Petchmorakot later said he’s open to a rematch with the former Lumpinee champion who gave an excellent account of himself on his ONE Championship debut. 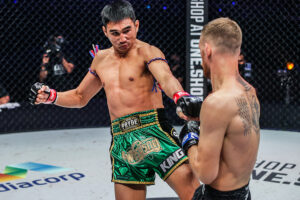 Joseph Lasiri scored a major upset, beating Prajanchai PKSaenchaigym to win the strawweight Muay Thai title. On paper it looked like a mismatch but the Italian, who lost his first four ONE Super Series fights, pulled off a surprise stoppage win.

Lasiri had a big second round and showcased excellent fundamentals as he caught the champ with a head-body combination, a clean left uppercut and a stiff naked jab to the bridge of the nose that busted his opponent open. Blood continued to pour from the champion’s face as the Italian went to work with one-two’s, uppercuts, and knees.

Prajanchai stormed forward in the third but got cracked by a big right hand from Lasiri. The self-belief was palpable in the #1 contender here, and he continued to tee off on the former Lumpinee champion

The punishment got the better of Prajanchai and with his vision impaired by blood he quit on his stool at the end of the third round. Lasiri was crowned the strawweight Muay Thai champion pulling off an incredible career turnaround.

The flyweight Muay Thai Grand Prix semi finals are set. Rodtang Jitmuangnon, Walter Goncalves, Superlek Kiatmoo9 and Savvas Michael all progressed to the penultimate round of the tournament with wins at ONE 157.

In the atomweight division Wondergirl Jaroonsak (1-0) got her MMA career off to the perfect start by submitting previously undefeated Indian Zeba Bano (6-1). Meanwhile Alyse Anderson (6-3) had to overcome some early adversity before submitting Asha Roka (4-3) with a triangle choke.