Priscilla Hertati Lumban Gaol says she is ready to fight anyone

Priscilla Hertati Lumban Gaol is a veteran of 11 ONE Championship fights. That makes her one of the most experienced female fighters on the roster and the Indonesian is coming off back to back decision wins.

The 31 year old did not manage to crack the top five in the recently released rankings. But that is testament to the strength in depth in ONE Championship’s atomweight division.

With four wins in her last five fights Gaol’s career appears to be on an upwards trajectory. She is willing to fight anyone and everyone in the division,

“I have never called out anyone because I have never rejected any assignment given to me by ONE. My coach always told me not to pick a certain opponent. He even went on to say I should stop training if I only wanted to fight certain opponents,” she said. 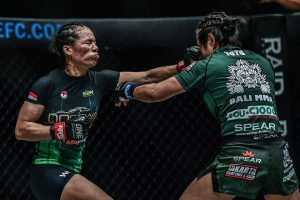 Gaol did turn down a fight with Rika Ishige. But only because she wasn’t ready to compete at the time,

“When I was injured, ONE offered me a fight with Rika Ishige. Her BJJ is good and she is skilled in ground fighting (but) I didn’t have any issue with that match,” she said.

Gaol’s last six fights have all gone the distance. It means she has spent over two hours fighting for ONE Championship and it has helped her develop into a versatile mixed martial artist,

“When my opponent is very skilled in ground fighting it doesn’t mean I have to go toe-to-toe in that department. It all depends on the strategy from my coach. I’ll be who I am because the situation can change during a fight. We never know.” 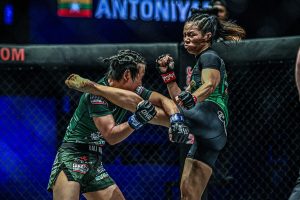 During the coronavirus, or Covid-19 crisis many fighters are eyeing up prospective opponents. But that is not Gaol’s attitude, she is willing to face any fighter on the roster,

“My coach and manager tell me to be ready for anyone whether she is the champion or not. No matter what, training needs to continue (and) just because I am on a winning streak it doesn’t mean I can neglect (that) duty.”

Gaol has been in with Tiffany Teo, Gina Iniong and Jihin Radzuan. But the wushu and kickboxing veteran has fallen short every time she has been thrown in with a top contender.

It’s a record she would like to put behind her and Gaol hopes her next big fight will end differently,

“If I need to face someone stronger if I train hard (then) God willing I can secure the win. That’s what my coach always tells me. So basically, what matters the most is to keep preparing,” she says. ONE Championship has been holding events in Indonesia since 2012. Fighters from the nation are well represented in the lighter weights but none of them are currently ranked.

It is something that Gaol is well aware of. She would love nothing more than to become the first Indonesian to challenge for a ONE Championship title,

“I have a wish that one of our Indonesian fighters will be able to win a world title. If I can earn that opportunity I would be extremely proud not just for me but for the whole of Indonesia.”

Abbasov whitewashes Kadestam to be crowned new welterweight king at ONE: ‘Dawn Of Valor’ 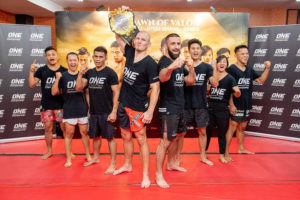 Leandro Ataides rematches Vitaly Bigdash at ONE: ‘Dawn of Valor’