Rahul Raju says he has a new style

Rahul Raju has not won a fight since 2019. But it is not the first time that the Indian has been on a losing streak and he bounced back strongly when it happened last.

Raju lost his first three ONE Championship fights but took a six month break from competition and then returned to win his next two. He has done something similar after losing to Ahmed Mujtaba at ONE: ‘Unbreakable’ Part III earlier this year,

“I’m coming from back-to-back losses, so my mindset was a little bit off. That’s why I took a long break. So now, I’m really ready. I’m ready and I can’t wait to get inside the circle again,” he said. 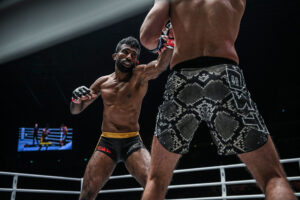 Raju faces promotional newcomer Otgonbaatar Nergui at ONE: ‘Battleground’ Part II which is being broadcast this Friday. He knows it could be a pivotal moment in his career and says he has made a few changes,

“This match is very important for me. I have made a few changes in my style and in my defense, I’m going to be calmer and more precise and my timing’s going to be great.”

He was stopped in the opening round in his previous two fights and Raju feels he was not mentally ready,

“I learned a lot from those two matches. I made some huge changes in my striking game and my mind was a little bit down. I was not just there. Raju thinks that Nergui can be overly aggressive and sets an unrealistic pace. He questions whether the Mongolian has the stamina required to make this style sustainable,

“His weakness… I think when he’s coming to fight he just explodes everything out at first and eventually gets tired. My strength will be my grappling against him, and I have made some good changes in my striking game too, so I won’t be scared to strike him either. So, we’ll see how it goes.”

Raju’s last two ONE Championship wins both came by way of rear naked choke. He is hoping to repeat that trick when he faces Nergui at the Singapore Indoor Stadium,

“My prediction is probably submission in the end of first round or second round,” he said. Although he is originally from India the 30 year old lives and trains in Singapore. He represents local team Juggernaut and wants to give his friends and family something to cheer about after a couple of recent setbacks.

‘The Kerala Krusher’ is desperate to turn his career around with a big win this week. He has been training hard and pledges to put in a performance that will make people proud,

“I will make sure that I will come back and I will make you all proud. I promise that.” 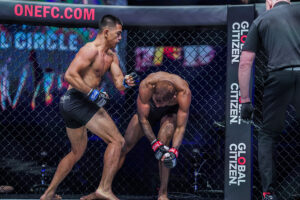