Saadeh, who was born in Germany but is of Palestinian descent, came into the bout looking to get back into the win column. A former flyweight world champion in BAMMA he was coming off a submission loss at Brave CF 29 in 2019.

The 27-year-old sought to shake off the cobwebs with a strong start and took Ali Hariri down with just 12 seconds on the clock. Working from half guard, Saadeh showed patience as he softened his opponent up with punches to the ribs.

From there, he worked to full mount before taking the back and unloading with more punches. Keeping his opponent tightly wrapped in a body lock, Saadeh constantly threatened to find the rear-naked choke and landed multiple strikes as Ali Hariri endeavored to survive until the end of the round. 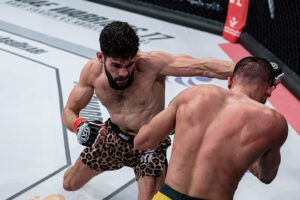 Ali Hariri came into the fight with a slight reach advantage and opted to strike with Saadeh at the start of the second stanza, throwing a head kick and a right cross. It was a short-lived salvo though, and he was soon taken down as Sadeeh quickly went to work with elbows and punches from the top position.

Saadeh was in control but beginning to show less activity and the referee stood the fighters up with just over a minute to go in the round. From there, the Berlin-based fighter unleased a lovely one-two combination that had Ali Hariri stumbling backwards.

In the wake of those shots, Ali Hariri went for the takedown but Saadah sprawled well and was soon at his opponentâ€™s back again, dishing out punches. With one or two of the strikes appearing to hit Ali Hariri on the back of the head, the referee paused the contest and took a point from Saadeh. When the action returned to the feet, the Moroccan tried to keep Saadah at bay with a teep kick but soon found himself back on the canvas following another successful takedown from the German.

At the start of the third, Saadah showed off a diverse skillset as he landed right, left jumping knee combination that led to yet another takedown.

The pressure from Saadeh was unabating and he controlled his opponent for the remainder of the contest. All three judges saw the contest in favour of the Palesinian.

He probably should have found the finish, particularly as the fight ended with him raining down punches, but he dominant decision victory takes his record to 12-3. Meanwhile Ali Hariri slips to 5-4.