Red Dela Cruz will be back in action at UFC London. The Filipino octagon girl recently shared some photos of herself sightseeing in London.

She announced on Instagram that she was in England for this weekend’s UFC event:

Red was a a permanent fixture at the UFC’s recent run of events in Abu Dhabi. But the stunning Filipina, who is based in Australia, has not been seen at any of the promotion’s recent events.

She will be octagon side for UFC London. The card is headlined by a welterweight fight between Alexander Volkov and Tom Aspinall.

Dela Cruz won’t be the only Asian in action that day. Japanese welterweight Takashi Sato was a late addition to the card and will be taking on Gunnar Nelson at the O2 Arena this weekend. 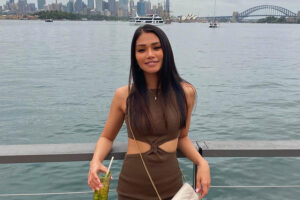