Ritu Phogat has shared some of her thoughts on the upcoming atomweight title fight between Angela Lee and Stamp Fairtex. The champion is returning after a two year absence while the challenger has fought eight times in the last two years.

It means that there are more questions surrounding Lee than there are Stamp heading into the fight at ONE: ‘X’. Phogat was asked whether she thought the champion would be the same after missing several years to give birth to her first child.

The answer appears to be an emphatic ‘yes’,

“I think that Angela Lee will return with the same energy as she used to. That kind of break does have an effect, but I am sure that Angela Lee is preparing herself well for this fight.” 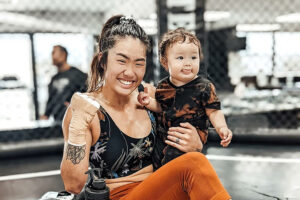 Stamp has never fought for a title. Although she did submit Phogat in the second round when they faced off in the final of the atomweight Grand Prix earlier this year.

By contrast Lee has been involved in six title fights and Phogat thinks this experience will be key,

“She is a champion, and she knows what it takes to be a champion. You have to be mentally strong to keep going.”

While she stopped short of giving an actual prediction it sounds like Phogat’s money will be on the champion to prevail in the atomweight title fight which headlines ONE: ‘X’.