Rizin 27 is set for the Tokyo Dome on March 14th. It will be the first time the promotion has put on an event at the 55,000 capacity baseball stadium.

Last night Rizin 26 took place at the Saitama Super Arena. The capacity was limited due to Covid-19 restrictions but the event attracted an audience of 9,908.

If social distancing regulations are still in place by March then at least the larger Tokyo Dome will allow Rizin to sell more tickets and attract a bigger audience.Â  The venue is famous for hosting the inaugural Pride event in 1997.

Takeru was ringside to watch Tenshin Nasukawa beat Kumandoi Petchjaroenwit last night. A fight between the two would be the biggest matchup that the promotion could possibly make.

However Takeru is booked to face Leona Pettas at K’Festa 4 this month while Tenshin is competing on a Rise card on February 28th. So speculation that the two could finally meet at Rizin 27 appears to be wide of the mark. 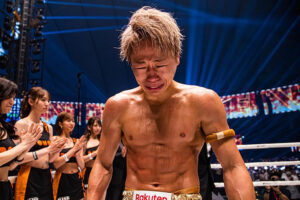