Shooto 0320 took place on Saturday at Korakuen Hall, Tokyo, on the eve of the city’s two-month long state of emergency being lifted. There was title action in the main event with Ryo Okada successfully defending his Shooto bantamweight title against Takafumi Otsuka.

Okada, who was cornered by Rizin star Hiromasa Ougikubo, has not lost a fight since 2017, and put on a professional display against a spirited challenger who took the champion the five-round distance.

Otsuka, who had the one and only Satoru Kitaoka amongst his cageside team, received a number of calf kicks in round one before failing in his attempt to apply a guillotine choke. 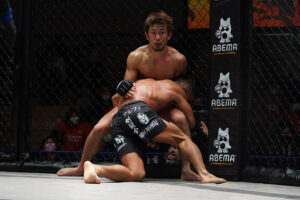 The contest was even in round two with both men looking sharp and little to separate two of Shooto’s leading names. Otsuka rallied late on in round three as he recovered from a right hand which sent him down to his knees as he searched for a submission.

The champion utilized effective body shots and counter punching in round four as he started to pull away from his rival on the scorecards. In round five he slammed Otsuka who desperately tried once again to apply a guillotine choke to no avail.

The champion checked the clock which gave his opponent the opportunity to executive a slam of his own before the fifth and final stanza concluded,

Both men held their hands up claiming victory but it was Okada who earned the decision victory to remain the Shooto bantamweight champion. He improves to 17-4-3 while Otsuka drops to 28-18-1.

Wonderkid Tatsuro Taira (8-0) submitted the experienced Yoshiro Maeda (38-19-3) securing a rear naked choke just 62 seconds into their flyweight fight. Shinya Aoki raved about the performance of the youngster who spoke of his title ambitions post-fight.

Mamoru Uoi  (22-10-5) dropped a decision to Joji Goto (12-4-1) in their featherweight fight. Motoshi Miyaji suffered his first loss since 2016 at the hands of local favourite Kazuhiro Sugawara who scored a second round knockout.

A 90-second 7.2 magnitude earthquake hit north-eastern Japan immediately following this bout with a tsunami advisory issued for the Miyagi Prefecture.

Tatsuro Taira in no rush to challenge for flyweight title

Tatsuro Taira says his goal is to be a world champion