Sage Northcutt says he plans to fight at featherweight

Sage Northcutt‘s ONE Championship debut didn’t exactly go according to plan. He was brutally knocked out by Cosmo Alexandre, suffering eight facial fractures.

That fight was nearly a year ago at ONE: ‘Enter the Dragon’. It has taken time for Northcutt’s injuries to heal and the former UFC poster boy has made some big changes,

“I’m so excited to get back. I’m going down and I’ll be competing at featherweight,” he revealed.

Northcutt’s last fight was at welterweight, that’s an incredible 30lbs difference. For most fighters it would mean totally transforming their body type but the 24 year old says it has been a comfortable transition,

“When I fought before I was always kind of over-eating trying to gain weight. Now, I’m just walking around at my natural weight.”

The UFC veteran believes he will be better fighter in the lower division, 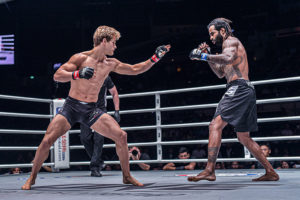 In order to compete in ONE Championship’s featherweight division fighters have to step on the scale weighing 155lbs or less, and prove they are not dangerously dehydrated. During his break from competitive action Northcutt has been researching the subject and is in favour of the system,

“I think the hydration tests are very smart. From all the research I’ve studied any kind of athlete, whatever sport they’re in, when they’re hydrated they perform better,” he said.

Northcutt admits he might have made a mistake in starting his ONE Championship career as a welterweight. He suffered a devastating defeat and learned a valuable lesson about competing in the correct division,

“That was a very big weight class for me. I learned so much from my last fight, I am definitely expecting a different Sage out there.” 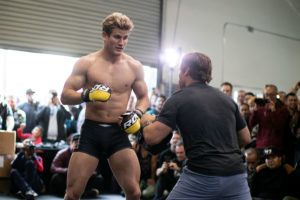 With most of the world stuck at home during the coronavirus or Covid-19 crisis, people have time on their hands. It means fighters are studying more footage than ever before and Northcutt is no exception,

“I’ve been watching so many videos for so many months now while I’ve been healing up. I’ve been looking at everybody including Martin Nguyen, the champion. He’s impressive.”

ONE Championship has a deep featherweight roster and there are no shortage of options for Northcutt. The likes of Garry Tonon and Thanh Le are all in contention but the UFC roster says he is happy to face anyone,

“I want to be the champion, that’s still my goal. I’m definitely looking forward to getting back in there but I’m not looking at anyone in particular for my return fight,” he said. 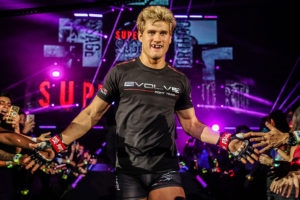 Northcutt can at least console himself with the knowledge that Covid-19 struck while he was still sidelined through injury. The American isn’t quite ready to make his ONE Championship comeback just yet,

“I’ve still been waiting on the doctors to give their approval to have full contact but I’m doing what I can. I’m staying in shape, I’m staying ready mentally. I’m more ready than I have ever been. I have more fire in my stomach to go out there and kill it.”

Not everyone welcomes the opportunity to spend time stuck on their own, or with only their immediate family for company. But Northcutt is a natural optimist and can find positives in just about any situation.

For many people the coronavirus has been a catastrophe, but for the 24 year old it is just another source of motivation,

“I use it as motivation. I’m more pumped than ever to get stronger, and go back out there and perform better than ever.”