Sage Northcutt’s ONE Championship career has not panned out the way he would have wanted. The American has one knockout loss to show for his three years on the roster but at the age of 26 time is still on his side.

Northcutt has not fought since 2019 but wants to make up for lost time by being extremely active this year,

He will be fighting at ONE Fight Night 10. The UFC veteran takes on Ahmed Mujtaba in Colorado and is excited to be competing on the same card as Demetrious Johnson,

“You have an incredible fighter, Demetrious Johnson, headlining the card, so the card’s gonna be super exciting, especially for the first card in the U.S. I’m so excited.”

Northcutt made his ONE Championship debut in Singapore and it didn’t go to plan. He was knocked out by Cosmo Alexandre in the opening round and suffered several facial fractures.

Prior to that he had spent his entire career competing in the US and says he is excited to be fighting in his homeland again,

“Oh man, I’ll tell you what, it feels so good to be back. It’s been a while. I’ve been itching to get back. Not only that, getting the fight in the United States, the first US card for ONE Championship, I couldn’t be more excited for that.”

Anyone who follows Northcutt on social media will know that the American always looks fighting fit. He spends a lot of time in the gym and feels he has improved during his three year absence from competitive action,

“A lot of people will be thinking ‘Hey, Sage might have some ring rust’ (because) it’s been three-and-a-half years, it’s a little bit of time but I’ve been training, I’ve been staying sharp. I feel like I’ve improved in a lot of different areas, I’m looking forward to showing it.”

The last time Northcutt fought in the US was 2018. He was riding a three fight winning streak with the UFC when he walked away from the promotion and wants to get back to winning ways in Colorado on May 5th,

“Whether it’s a submission, whether it’s ground-and-pound, or it’s a knockout, whatever it is, a finish would be the ideal way to win, but you know I’m training for any aspect out there. I’m prepared.” 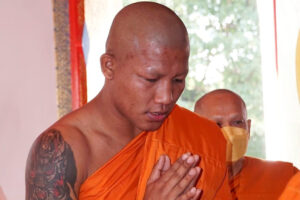 Rodtang Jitmuangnon has become a monk!