“What’s up with Ray Borg? He can get it. Anybody can get it. Anytime of the day!” These were the first words out of Shawn Bunch’s mouth after his win over Rany Saadeh at UAE Warriors 22 last night.

Bunch steaked his claim for a shot at the UAE Warriors bantamweight title with a win over former BAMMA 135lbs champion Saadeh. The Bellator veteran came into the fight on the back of two straight losses but went to work quickly here with an early takedown.

Bunch controlled his opponent on the ground for the bulk of the round, landing some solid punches and elbows. When the pair got back to their feet he caught Saadeh with a right hand before cracking him with another that dropped the German to the canvas. 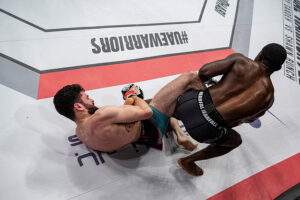 Saadeh landed a stinging leg kick early in the second stanza. He soon landed another and was able to defend when Bunch moved in for the takedown.

Saadeh planted another low kick before getting tagged with a naked right hand. The 38-year-old clipped Saadeh with another big cross straight down the pipe before pushing the German against the fence.

As the action slowed, referee Marc Goddard returned the fighters to the center of the cage. Bunch landed another straight right before the bell. 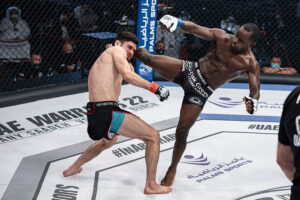 The right cross continued to work well for Bunch at the start of the third. Saadeh replied with a left body kick and a big right low kick. He soon clapped Bunch with another. The American then returned to his wrestling and secured the double leg.

Saadeh found his feet and it wasn’t long before the 28-year-old was on the wrong end of another right-hand counter. In turn, Saadeh continued to look for the single leg kicks.

Changing tactics, he then shot for the takedown but saw his attempt stuffed. Saadah landed a pair of jabs but was soon taken back down to mat. He did manage to clip Bunch with an elbow at the bell, but the older fighter had done enough over the course of the fight and took home the split decision win.

His record climbs to 10-5. Saadeh slips to 12-4. This was Bunch’s first fight in more than a year and a half and afterwards he immediately called out former UFC flyweight challenger Borg.